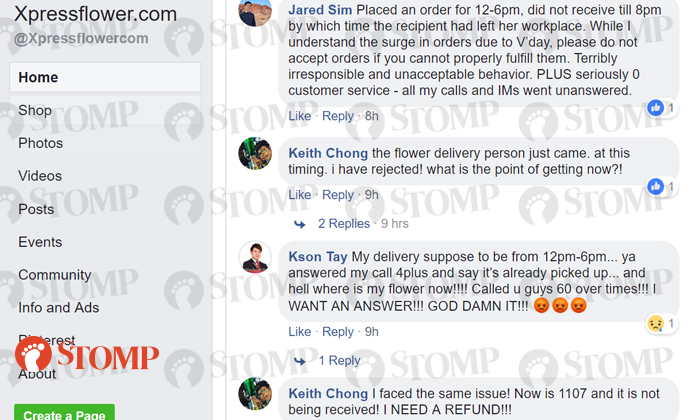 Valentine's Day is supposed to be filled with love and happiness, but florist company XpressFlower has received flak from angry customers for its failure to fulfil orders.

Stomper Ng shared his less than pleasant experience when flowers that he had ordered and paid for in advance failed to be delivered to its intended recipient on the special occasion.

He said: "XpressFlower confirmed my order for flowers several days before Valentine's Day via e-mail and deducted the money from my credit card immediately, but failed to honour the order on Valentine's Day.

"As per confirmation, the delivery was supposed to be on Feb 14 within the timeslot of 12-6pm.

"However, on that day, when the delivery did not take place at 5pm, calls and e-mails were made to check on the status of the delivery.

"However, XpressFlower did not reply to any emails or pick up repeated calls till 9pm."

Stomper Ng pointed out that this was despite the company stating on its website that its hotline operates until midnight.

The Stomper also shared screenshots that he took of XpressFlower's Facebook page, showing that he was not the only affected customer.

Facebook user Jared Sim said he "did not receive [the order] till 8pm by which time the recipient had left her workplace", adding that his calls and messages to XpressFlower went unanswered.

According to Facebook user Keith Chong, his order came at around 11.30pm, which he "rejected".

Similarly, other users shared how they did not receive their orders despite it being past 10pm and that attempts to contact the company were futile.

On the same thread, XpressFlower acknowledged its "service lapse" and said: "We had some hiccups with logistics earlier in the day that caused some problems to latter orders."

According to XpressFlower's comment, recipients who did not get their orders would receive a refund and a complimentary bouquet.

In response to a Stomp query, Mr Joseph Soh, managing director of XpressFlower, said: "The fact is, we are already back to business as usual since this morning.

"On a day like Valentine's Day, when deliveries are multiple times of a normal day, it is unavoidable that there will be lapses. What's important is how we handle them with honesty and sincerity.

"We have been in business since 2004 and have gone through similar situations before the internet age. It is unthinkable that XpressFlower would try to wriggle out of our responsibility to our customer for a few dollars."

Mr Soh also shared screenshots showing that the company has since gotten in touch with affected customers via private messages on Facebook.

The customers were offered a refund in addition to a complimentary bouquet.

In one screenshot, Facebook user Jared Sim told XpressFlower that he appreciated the gesture.

Jared added: "It is unfortunate that this recent incident (having placed a number of orders in the past) has marred an otherwise positive experience I have had with XpressFlower."

However, according to Mr Soh, Stomper Ng has yet to reply XpressFlower "with any details of the order he supposedly had placed with us."

Related Stories
Two florists break customers' hearts by failing to fulfill over 350 orders on V-Day
Local florist comes under fire for failing to deliver flowers and not responding to customers on V-Day
Man waits over 2 hours for Deliveroo to send him his Sakae Sushi dinner -- that never came
More About:
Valentine's Day
bad service
facebook
complaint