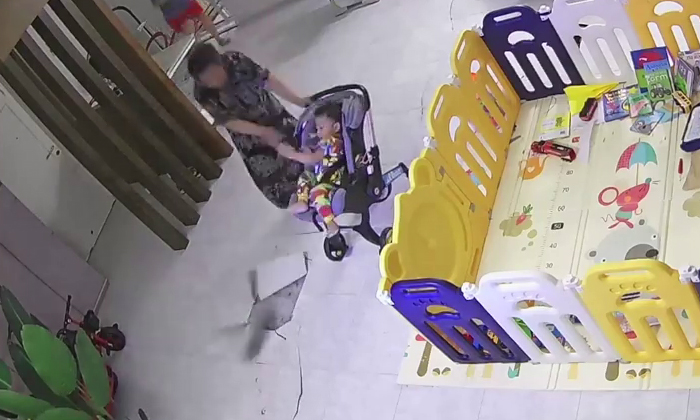 A family at home were stunned and baffled when floor tiles exploded just inches away from where they stood.

Video footage of the incident was put up on Facebook by the homeowner of Jan 23, and it shows the moment a part of the living room floor cracks and bursts into dust – startling a woman whose toddler grandchild is in a pram less than a metre away.

In the post, the homeowner, Mr Fauzi Hussin, said his wife, baby and mother-in-law were at home in their Housing Board flat in Tampines Street 45 when the incident occurred at 7:35pm on Jan 22.

He said that just before the incident, cracking sounds could be heard, which sent the man’s mother-in-law to inspect the living room.

Just as she approached her grandchild in a pram, at least three floor tiles exploded next to them.

The three residents then left the flat.

"They thought that the building was about to collapse. They quickly grabbed their stuff and evacuated the flat," Mr Fauzi wrote.

No one was injured in this incident.

In an update on Jan 24, Mr Fauzi said an HDB officer visited the unit to inspect the affected area and arrange for the clearing up of the debris.

According to him, he was told that HDB was not liable for the damages as he bought the flat off the open resale market.

Mr Fauzi said he purchased the 24-year-old five-room flat in 2017, and did not do any renovation work on the flooring.

He also said he is submitting an insurance claim for the damages, but investigations need to be carried out first.

In January 2018, several residents in HDB flats in Sengkang, Woodlands, Hougang and Jurong West reported that their home floor tiles spontaneously popped and cracked – all within the same week.

At the time, experts said the incidents could have been triggered by the cooler-than-usual weather, which accelerates the expansion or contraction of the adhesives used in the floor tiles, causing them to pop.