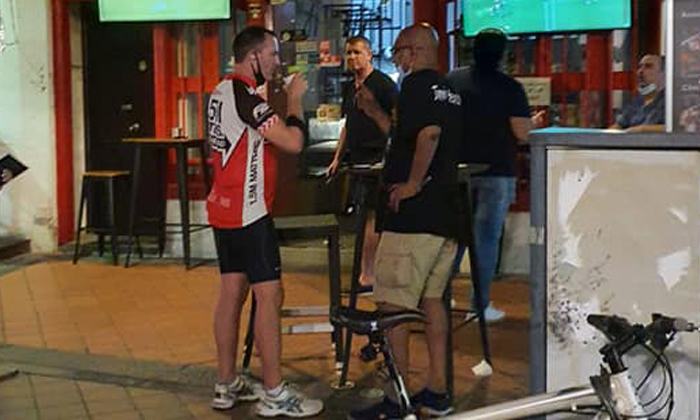 Five men were seen outside a Boat Quay restaurant on Sunday night, drinking and chatting without wearing masks properly.

According to a woman, who was walking to Funan mall to buy dinner, the group appeared to include foreigners. They were still there even after she had bought her dinner, her Facebook post said.

From the pictures she took, three of the men gathered around one of the tables with what looked like beer bottles.

Another two men were chatting at a nearby table, one of them in sports attire.

Most of them had their masks pulled down to their chin, and one was not wearing a mask.

It is not clear if the men knew each other earlier.

When contacted, the owner of the restaurant, who wanted to be known only as Mr Esad, said the men had ordered food from the restaurant and were waiting for their takeaway meals.

He said: "I didn't sell them the alcohol, and I have not been selling alcohol for the past two months during the circuit breaker. We don't allow dine-ins, and we only allow them to do takeaway."

He added that the men left after they collected their food.

Mr Esad said he also explained the situation to the authorities when they came down for checks. He added that he had moved some of the tables and chairs placed outside into the restaurant to prevent such incidents from happening again.

Minister for Culture, Community and Youth Grace Fu previously said that the Covid-19 outbreak has stressed social faultlines and increased tensions between foreigners and locals.