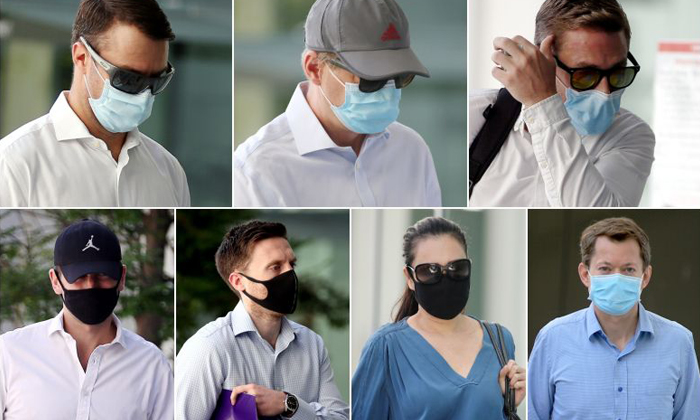 Six men and a woman, allegedly linked to a group gathering in the Robertson Quay area amid the Covid-19 outbreak, appeared in a district court on Tuesday (June 2).

They are accused of flouting circuit breaker measures and were charged with offences under the Covid-19 (Temporary Measures) Act.

Buchan, Beatt, Poynter and Blair are Britons while Czerny is an Austrian. Bao Nguyen Brown and Jeffrey George Brown are Americans.

The four Britons are accused of meeting one another near Italian restaurant Rosso Vino in Merbau Road “for a social purpose”, between 6.19pm and 6.44pm on May 16.

The other three are said to have met one another near TAP @ Robertson Quay between 6.08pm and 6.40pm that day.

The trio are represented by lawyer Mirza Namazie who told District Judge Adam Nakhoda that Bao Nguyen Brown has lived in Singapore for 14 years and has a son who attends school here.

He also said that she is an employment pass holder but did not reveal her occupation. The Straits Times understands that she is married to Jeffrey George Brown.

The court heard that Czerny is a Singapore permanent resident who has two children attending school here.

Last month, pictures of crowds along Robertson Quay circulated on social media, showing people failing to keep a distance of 1m from one another at the riverside dining enclave.

Most of the people pictured were not wearing masks, while some had their masks lowered as they chatted with one another.

Minister for the Environment and Water Resources Masagos Zulkifli had said in an earlier Facebook post that such breaches were to be taken "very seriously".

On May 17, the Urban Redevelopment Authority issued a directive to some restaurants at Robertson Quay, barring them from selling alcohol for takeaway with immediate effect, as the takeaway sales had contributed to more people gathering in the area.

The circuit breaker measures are lifted on Tuesday.

Court documents did not state whether all seven alleged offenders were employment pass holders.

In a statement on Monday, the Ministry of Manpower (MOM) said that foreigners working in Singapore on work passes must abide by the country's laws.

Its spokesman added: "Regardless of pass types, those who are convicted (of) offences risk having their work passes revoked, in addition to an employment ban... Work pass holders are reminded to take these rules seriously, for their own protection and the safety of the community at large."

MOM also said that as part of a nationwide circuit breaker to halt Covid -19 transmissions, the Government has introduced measures such as requiring everyone to wear a mask whenever they leave their homes.

These measures are strictly enforced regardless of a person's nationality.

"Singaporeans and foreigners alike have been penalised for flouting the rules. These have been widely publicised," said the spokesman.

The cases involving the seven alleged offenders have been adjourned to June 16.

For each charge, offenders convicted under the Act can be jailed for up to six months and fined up to $10,000.