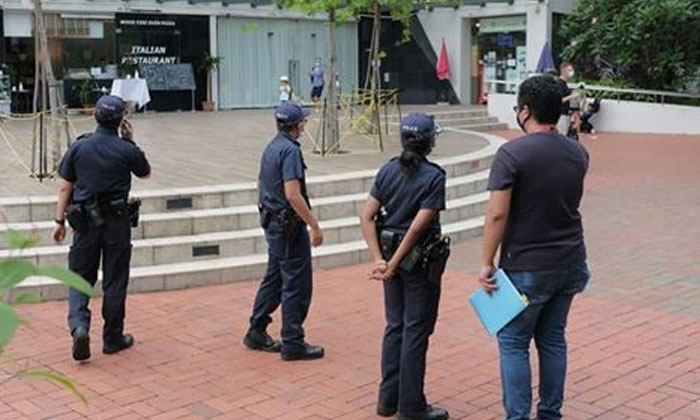 The police have tracked down "a number of the individuals" who gathered along Robertson Quay over the weekend despite the circuit breaker, said Minister for the Environment and Water Resources Masagos Zulkifli on Monday (May 18).

"These persons are non-Singaporeans, and are currently under police investigation," he said, adding that the authorities will enforce the law against anybody found breaching safe distancing measures.

In his Facebook post, the minister referred to photos of crowds along Robertson Quay that circulated on social media this past weekend.

The photos, which were shared in a Facebook post on Saturday evening that went viral, showed people failing to stay at least 1m from one another in the riverside dining enclave.

Netizens, noting that the riverside area tends to draw an expatriate crowd, were quick to suggest there might be "double standards" at play. Others called the people out on their behaviour, saying they were "selfish" and disrespectful of front-line workers.

Said Mr Masagos: "The Circuit Breaker can only work when everybody plays their part. We will enforce against anybody found breaching safe distancing measures."

He noted that Urban Redevelopment Authority (URA) officers have been patrolling the area, and most people and operators there are complying with the measures.

"But some restaurants were selling take-away alcohol, which had contributed to individuals gathering around these premises," he said.

The URA on Sunday issued a written direction to 10 restaurants to immediately stop the sale of take-away alcohol. The agency will continue monitoring the area with the Singapore Police Force to ensure compliance by operators and individuals.

A URA spokesman said on Sunday that the agency has been doing regular patrols in areas such as the Central Business District, Singapore River - which includes Robertson Quay - and conservation districts.

While it found the majority of operators and individuals compliant with circuit breaker measures, nearly 30 fines and five closure orders have been issued in the past month to individuals and business operators.

Said Mr Masagos: "We urge everyone to abide by both the letter and spirit of the law to contain Covid-19. If you see any offenders, please don't just take photos for a posting. Report it through the OneService app with specific details and photos."

He also said Singapore is seeing progress made during the circuit breaker, which has been going on for about six weeks, with two more weeks to go.

"However, the fight against Covid-19 is far from over," Mr Masagos noted. "Countries around the world are racing to curb a second wave of infections."

He urged Singapore residents to continue staying at home as far as possible, and observe safe distancing and wear a mask if they have to leave their home.

Related Stories
Some Robertson Quay restaurants barred from selling takeaway alcohol after people found socialising during circuit breaker
Masseuse who offered sexual services during circuit breaker breaks down and wails in court over proposed $21k fine
McDonald's customer calls out other patrons for being 'socially irresponsible' as a joke, but netizens not amused
More About:
crowd
alcohol
Covid-19
police