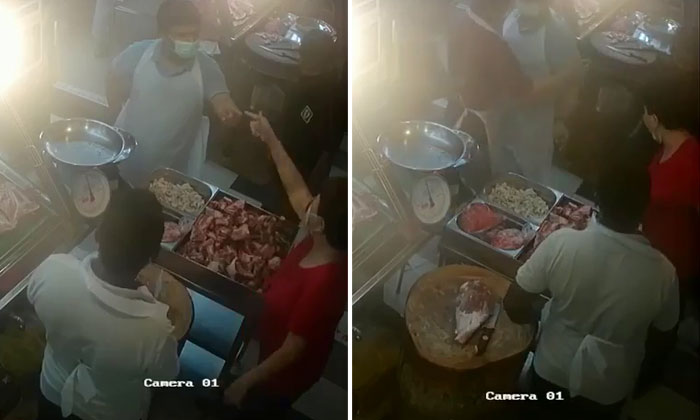 An argument over long queues ended up with a fishmonger spitting on a mutton seller at the Tekka Market on Saturday.

The incident started with a queue from the stall behind Mr Nizamdeen's mutton stall.

The queue had spilled over to the walkway connecting his stall and the fishmonger's.

Mr Nizamdeen, 40, told The New Paper: "The fishmonger auntie used an empty stall to display some fish and was not happy that the queue was blocking it."

As she got into a heated argument with a customer, he stepped in to mediate.

Mr Nizamdeen said: "I told her this was not even her stall, this was an empty stall she was using...This seemed to make the customer more adamant on not moving, which made her angrier."

She started hurling vulgarities at him in Hokkien and a little bit of Tamil, he added.

"She walked over to my stall and started hitting me. When I deflected her punches, she spat on me. My left cheek and arm were full of her saliva."

Video footage of the incident caught on closed-circuit television showed the fishmonger hitting Mr Nizamdeen on the arms and stomach.

He said he was disappointed and embarrassed by the situation as it happened in front of the morning crowd, the busiest time for the market.

He said: "We have been neighbours for almost 11 years now and this is the first time I have seen her act like that."

Mr Nizamdeen has since made a police report and gone to Tan Tock Seng Hospital for a check-up.

He said: "I am worried about the spitting, especially during this Covid situation."

Since the incident, both have returned to the market but do not acknowledge each other.