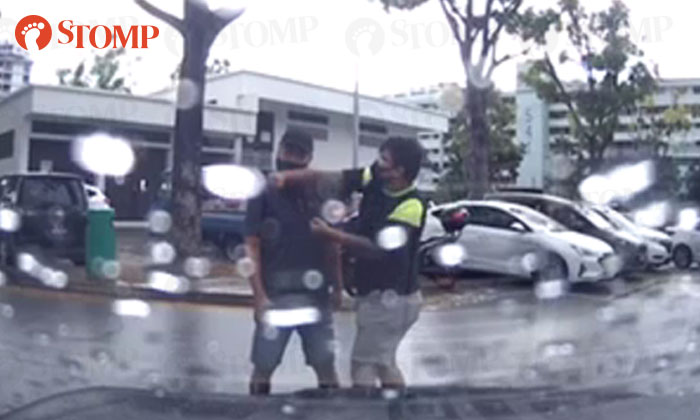 The police are investigating a case of voluntarily causing hurt after a man punched another driver in the face in a dispute over a parking lot at Ang Mo Kio Avenue 10 on May 20.

Stomper Cindy shared with Stomp that her husband was assaulted by the other driver near the wet market at around 9.45am.

In footage she shared with Stomp, the other driver is seen tailing her husband's car.

"He noticed the driver was trailing him very closely but didn't know why," she said.

"Turns out, he was trying to block my husband from parking in the lot when he was reversing.

"The driver decided to get out of the vehicle to confront my husband but my husband was already halfway into the lot so they got into an argument.

"When my husband was caught off guard, the driver decided to give him a sucker punch!

"He then tried to provoke my husband even more so that the fight would be even but my husband decided to call the police instead."

In response to a Stomp query, the police said they were alerted to a case of voluntarily causing hurt at a carpark in the vicinity of Block 530 Ang Mo Kio Avenue 10.

Related Stories
3 arrested for attack on youth who was ambushed while going to meet GF's ex-lover
Police looking into case of Toa Payoh residents being 'mentally tortured' by neighbours for past 4 years
Men argue over queue-cutting at McDonald's in Clementi: 'Your father's road ah?'
More About:
dispute
road rage
punch
carpark
parking
Ang Mo Kio