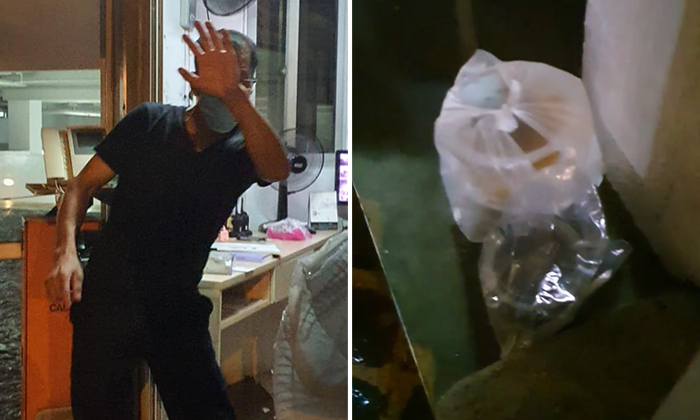 Submitted by Stomper Someone

A deliverywoman got into a heated dispute with a security guard at a condominum after he allegedly threw her customer's food on the grass.

Facebook user Chloe Ho posted a video of the incident that occurred at The Linear condominium along Upper Bukit Timah Road on Thursday (June 4), at around 7pm.

In her post, the 19-year-old woman said that she was making a food delivery to the condominium but was barred from entering the premises by a security guard.

She wrote in her post: "I stepped aside to call the customer to pick up their food. Next thing I know, the food is on the grass outside.

"I proceeded to pick it up and put on the table again. [The security guard] threatened to throw on the grass again so I left it on the floor as shown in the video."

In the video, Ho can be heard saying that the security guard had thrown the customer's food on the grass.

She tells the security guard, "Don't block" and "I want see your face" while recording the video.

The security guard, who has also started filming Ho with his phone, is then heard saying, "Don't touch me ah" and "What the f*** are you doing?"

According to Ho, the condominium had recently implemented new rules that required all delivery personnel to dismount from their bicycles and personal mobility devices first before registering their entry.

Ho, who was delivering three boxes of dessert, told Wanbao that she complied.

However, the security guard started scolding her for no apparent reason, she said, thus leading to the events captured on camera.

Ho also said that this was her second time clashing with the same security guard, though she is unable to recall what caused the first dispute a few days ago.

Not understanding why the security guard was so rude this time, she decided to take a video and post it online.

According to Wanbao, the security guard called the police following the altercation and officers arrived at the scene.

When reporters visited The Linear, the security guard involved in the incident declined to share further details as the matter is currently under investigation.