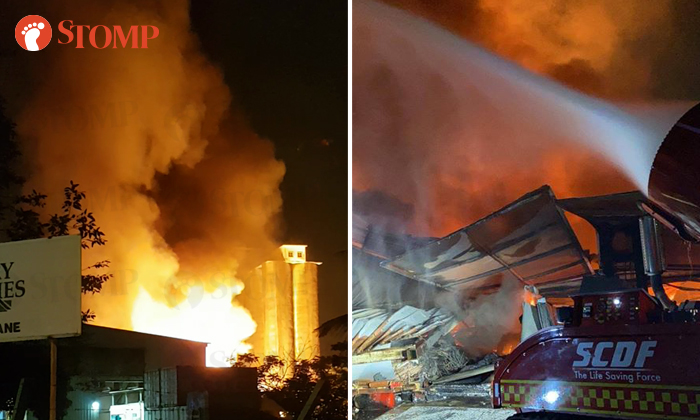 A fire that has been raging for hours broke out at a warehouse in an industrial area near Jurong River on Monday night (March 9). No injuries were reported.

The Singapore Civil Defence Force (SCDF) said in a Facebook post on Monday (March 9) that it was alerted to the fire at No. 18 Jalan Besut at about 8.10pm.

More than 50 occupants had evacuated themselves from the premises before firefighters arrived.

SCDF said that the fire involved the contents of the warehouse, such as plywood, household electrical appliances and furniture, among other things.

When firefighters arrived at the scene, the fire had fully engulfed the warehouse.

A 30-second video in an SCDF tweet shows firefighters in action, using water jets to contain the blaze.

“Due to the intense heat of the fire, the warehouse’s zinc roof had completely collapsed, trapping the fire underneath it and hindering the firefighters’ immediate access to the seat of the fire,” SCDF said later.

“Having surrounded the fire, the firefighters are inching their way through the rubble of heated metal to extinguish the fire.”