Fire breaks out at industrial waste management site in Tuas 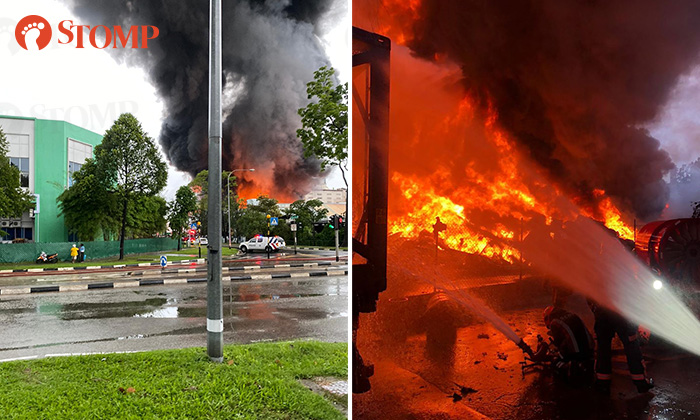 A fire involving an industrial waste management site at No. 48 Tuas Crescent broke out on Wednesday morning (Dec 11).

Several Stompers alerted Stomp to the fire and contributed photos and videos of the incident.

Thick columns of smoke can be seen as the fire rages.

A Stomper was leaving work at about 7am when he saw a huge column of smoke.

He told Stomp: "I walked in the direction of where the smoke was and I could smell something pungent. It smelled like gasoline or petroleum.

"There were a lot of fire trucks.

"I'm really concerned and thinking about the guys working there.

"Especially since this is an industrial area, I hope nobody got hurt."

Stomper Kader was on a bus at about 7am when all the passengers were made to alight from the bus.

He told Stomp: "I saw the fire blazing with great rage and it was drizzling too.

"We had to get off the bus. I walked to work and when I saw the fire, I was shocked."

Another Stomper said: "It's about 11am now, I'm in my office and I can still smell the smoke.

"I was going to work at about 7am when I noticed smoke from the fire.

"My office is about a five to ten minutes' drive away from the site of the fire.

"All my colleagues are currently wearing masks and I've been feeling nauseous and dizzy.

"I don't know anyone who works there and I don't know what is going to happen since there could be chemicals involved.

"Things are very serious, it's so terrible."

The Singapore Civil Defence Force (SCDF) said in a Facebook post that they were alerted to the fire at about 6am.

The fire, which involved "premises dealing in industrial waste management including recycled oil and solvents, was raging and spreading along nearby drains."

A total of 32 emergency vehicles and 80 firefighters were deployed, and eight jets and two Unmanned Firefighting Machines were being used.

The SCDF also uploaded a video of the firefighting efforts that went on at the scene.

In a final update at about 10.50am, the SCDF said in a Facebook post that the fire was rapidly spreading along nearby drains.

Director Operations of SCDF Daniel Seet said that the fire was brought under control at about 10am, four hours after firefighting efforts began.

The SCDF added that there were no reported injuries and the cause of the fire is under investigation.