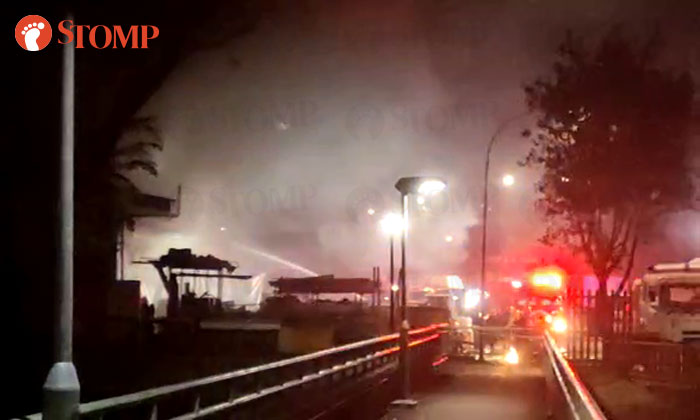 A fire broke out at a plumbing services workshop in a double-storey industrial building at Geylang Bahru in the early hours of Thursday morning (Oct 7).

Stomper Marco alerted Stomp to the incident and shared a video he took of Singapore Civil Defence Force officers at the scene.

The SCDF said in a statement on its Facebook page that it was alerted to the fire at 2.35am.

"Upon SCDF's arrival, the fire was well-alight in two ground floor units of a double-storey industrial premises," the statement said.

"Firefighters immediately deployed water jets around the exterior of the premises to contain the fire and prevent it from spreading.

[Fire @ No. 86 Geylang Bahru] Earlier today at about 2.35am, SCDF was alerted to a fire at the aforementioned location....

"Simultaneously, forcible entry was conducted to create quick access into the burning units.

"Once the fire was under control, firefighters wearing breathing apparatus sets proceeded deep into the smoke-logged unit to locate the seat of the fire.

"Firefighters had to exercise extreme caution as the second-floor mezzanine level had already collapsed."

The fire was extinguished by SCDF in about two hours.

A total of 17 emergency vehicles and about 60 firefighters were deployed to the incident.

"At the height of the firefighting operation, four water jets and an Unmanned Firefighting Machine (UFM) were deployed," said SCDF.

"A Combined Platform Ladder (CPL) was also utilised for aerial monitoring of the incident."

A firefighter, who is a full-time national serviceman (NSF), was taken to hospital after experiencing slight smoke inhalation. He has since been discharged from Singapore General Hospital.

No other injuries were reported.

SCDF said it is conducting damping down operations to prevent any potential rekindle of fire from hot burnt surfaces.