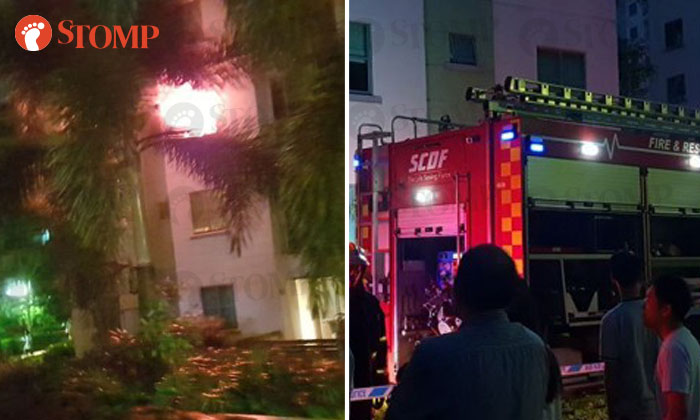 A fire broke out at Springdale condominium along Hindhede Walk in the Upper Bukit Timah area this morning (Nov 22) at about 5.41am.

Stomper Vikash, a resident of the condominium, alerted Stomp to the fire.

He told Stomp he heard people shouting from the ground floor at about 5.30am.

He said he looked at the window and saw the reflection of a fire then realised that the fire was coming from a unit opposite his home.

He said: "The fire took place in the same block which I am staying in, but we access it via different lobbies."

He rushed downstairs after grabbing his passport and some cash.

When he reached the ground floor at about 5.40am, there were many people standing around, waiting for the fire to be put out.

He took pictures of the incident from the ground floor and sent them to Stomp.

In one of the photos, black smoke can be seen escaping from the windows of the unit.

In response to a Stomp query, the Singapore Civil Defence said it was alerted to the fire at 5.41am.

SCDF dispatched two fire engines, a Red Rhino, an ambulance and a support vehicle to the location.

The occupants of the unit, a couple, had evacuated on their own before SCDF's arrival.

About 50 residents from the first to the fifth storeys had also evacuated.

Firefighters initially used two dry powder extinguishers and a compressed air foam backpack to contain the fire, which began in one of the bedrooms.

It took the SCDF about 10 minutes to put out the blaze.