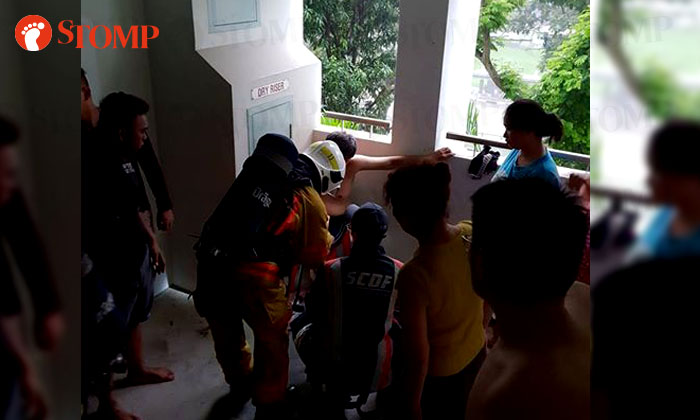 Stomper Kelly was at the scene at around 4.10pm and sent Stomp pictures of the incident.

She said that the man had burnt his leg as a result of the fire.

"The fire involved the battery from the e-scooter," she added.

"Neighbours helped put out the fire while waiting for the Singapore Civil Defence Force (SCDF) to arrive."

In response to a Stomp query, SCDF said: "SCDF responded to a fire involving a personal mobility device (PMD) at about 4.05pm on the third floor of Block 953 Hougang Avenue 9.

"The fire was extinguished by a member of public using buckets of water, prior to SCDF's arrival.

"A Chinese man in his 50s suffered minor burns to his left foot and was conveyed to Sengkang General Hospital."

In the photos Kelly sent, residents can be seen checking on a man who was seated down.