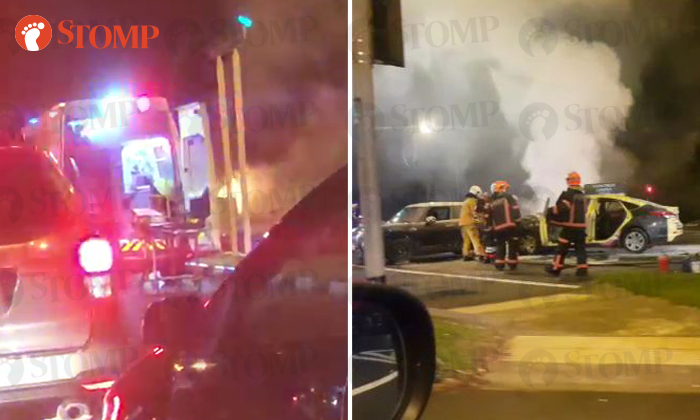 A 59-year-old cabby was taken to hospital after an accident involving his taxi and a Mini Cooper at the junction of North Buona Vista and Holland Road on Friday night (Nov 9).

The taxi had caught fire in the accident.

Stomper Anonymous contributed a video that showed the taxi in flames.

Stomper Alfred also shared photos showing smoke emitting from the taxi and firefighters at the scene.

In response to queries by Stomp, the police said they were alerted to the accident at 11.30pm.

The taxi driver was conscious when conveyed to National University Hospital. Stomp understands that he suffered abrasions.

The Singapore Civil Defence Force (SCDF) told Stomp that it responded to a vehicle fire at around 11.40pm.

The fire was extinguished using a hose reel jet and a compressed air foam backpack.

Stomp understands that the Mini Cooper had been making a right turn while the taxi was going straight when they collided in the middle of the junction.

View more photos ot the incident in the gallery.