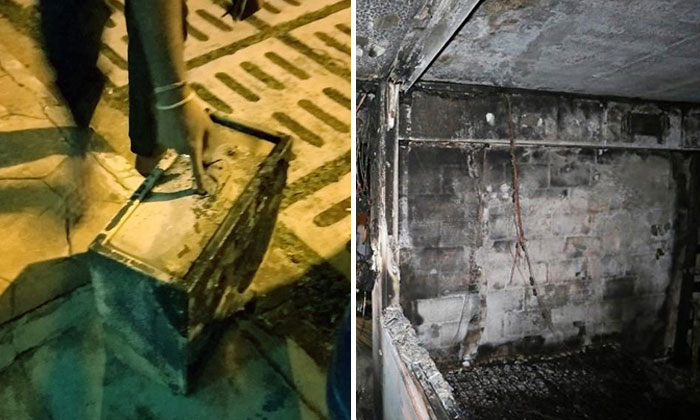 Over 60 residents were evacuated, while two women were taken to a hospital after a fire broke out in a second-floor unit at Block 147 Serangoon North Avenue 1 on Thursday (Jan 18) at about 7.00pm.

A resident told Shin Min Daily News that they heard at least five rounds of explosions.

The owner of a convenience store at the foot of the block, Mr Xu Chun Mu, 54, said:

“There was thick black smoke coming from the 2nd floor.

“I ran out to take a look, and within five minutes, the entire unit was in flames.

“I heard a series of five explosions and quickly called the Singapore Civil Defence Force (SCDF).“

Another resident, Mr Bai, 36, recalled that the air-conditioning in his flat had stopped working following a blackout.

He subsequently discovered that there had been a fire, and the residents on the block were being evacuated.

The 29-year-old owner of the affected flat told reporters that he, along with his wife and 7-year-old daughter were in the bedroom, when they saw a spark in an electric socket.

An electrical fan was in operation, and the fire started spreading quickly.

The owner’s mother was also in the flat.

Holding his daughter who was asleep, the owner, along with the rest of his family, quickly fled the blaze.

“My mother was also in the house at that time.

“We ran so fast, we didn’t have time to put on shoes.”

After the fire was extinguished, the owner returned to his flat and found that the safe had malfunctioned from the heat.

When he finally cracked it open,  he found that the $10,000 cash inside had been burnt to a crisp.

His wife's aunt had previously revealed that although the unit had been burnt down, there were still cash and valuables kept in the safe.

Related Stories
Explosions heard as SCDF officers fight blaze at Blk 147 Serangoon North Ave 1
70 residents evacuated after fire breaks out at Toa Payoh Block 45
Thumbs up to SCDF for keeping us safe even during the holiday season
More About:
fire
Serangoon North
scdf