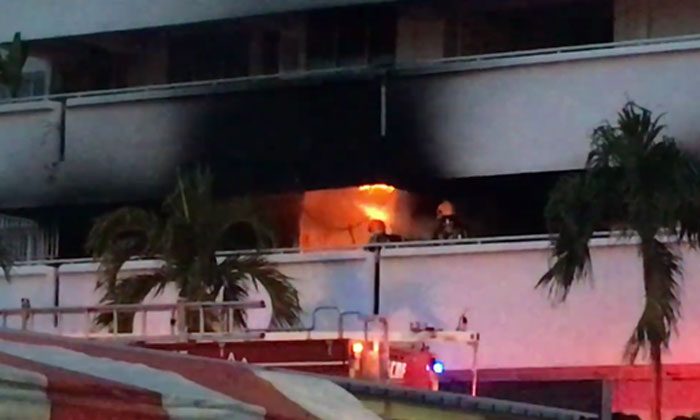 Two women were taken to hospital and 66 residents were evacuated after a fire broke out in a unit at Block 147 Serangoon North Avenue 1 today (Jan 18).

In the video, the flames are seen raging from a second floor unit of the block.

Singapore Civil Defence Force (SCDF) officers are seen outside the unit fighting the fire and backing away as explosions are heard.

Stomper Stella also shared footage of the incident taken from the carpark near the block.

In response to Stomp's media queries, an SCDF spokesman provided the following lines:

"SCDF was alerted to a unit fire on the second floor at Block 147 Serangoon North Avenue 1 at about 7.15pm.

"The fire involved contents of a bedroom.

"The fire was extinguished my SCDF using compressed air foam and one water jet. No forcible entry was conducted.

"A total of 16 residents from the second to fifth story were evacuated by SCDF and SPF officers. These were residents whose units were in close proximity and directly above the affected unit.

"A female in her 80s and another female in her 30s from neighbouring units were conveyed by SCDF ambulance to Tan Tock Seng Hospital (TTSH) for complaint of breathlessness.

Related Stories
Explosion heard as car bursts into flames on PIE towards Tuas
70 residents evacuated after fire breaks out at Toa Payoh Block 45
Thumbs up to SCDF for keeping us safe even during the holiday season
More About:
fire
scdf
explosion