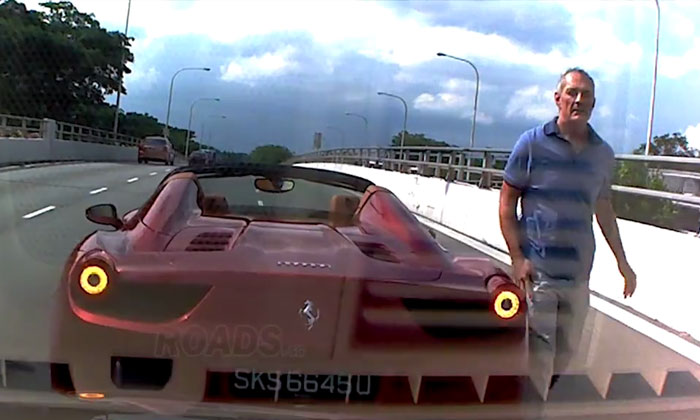 Police have confirmed that a report was lodged and investigations are ongoing.

A Ferarri driver chased after another driver and then started braking suddenly in front of him before stopping his car in the middle of Farrer Road on May 20 just to confront him for not giving way earlier.

A video of the incident was posted on ROADS.sg's Facebook page and contributed by Ankur.

According to Ankur, he was in the right merging filter lane and was ahead of the Ferrari with licence plate number SKS6645U so he signalled his intention to merge ahead of him.

However, the Ferrari driver was not happy and sounded his horn at Ankur "several times".

"Clearly not happy that I didn't give way to his big ego, he tailgated me at high speed, revving his engine continuously and chased me along Farrer Road," wrote Ankur.

"He cut in front of me and brought me to a standstill in the middle lane of [the] busy Farrer Road flyover.

"He got out of the car and was challenging me to get out.

"As I had my wife and kids in the car, I did not want to entertain him as he looked like a crazy fella.

"I drove off and he kept following me. I drove straight to Bishan Police Station and lodged a Police report."

Ankur added that he initially wanted to wait for the Traffic Police to deal with the driver before posting the video but has not heard anything yet.

Netizens have slammed the Ferrari driver for his reckless behaviour of stopping his car in the middle of a busy road and for holding up other road users apart from Ankur.

However, to be fair, many noted that Ankur should have let the Ferrari merge ahead of him following the "zipper merge" method.

Stomp has contacted the police for more information.