Woman says $1.4 million Ferrari was hit by van -- but can you see any scratches? 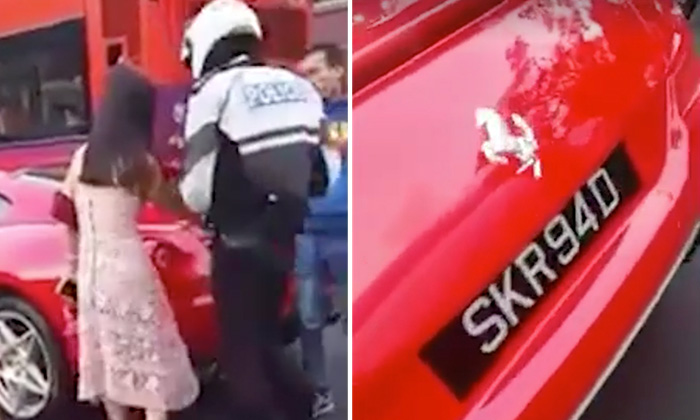 A woman of a $1.4 million Ferrari allegedly claimed her luxury car was hit and scratched by a van.

According to the caption of The Road.sg Facebook video, the Ferrari owner had initially jammed on her brakes, causing the van driver behind to jam on the brakes too.

The Ferrari driver then alighted from her car and claimed that the rear of her Ferrari was damaged and scratched.

The video below shows the woman showing a Traffic Police (TP) officer the alleged scratch on her car.

Siti, the owner of the footage, stated in the caption that the TP officer and everyone at the scene could not find the scratch.

In the video, Siti could be heard saying in Malay, "Where is the scratch?"

"C'mon TP... ask her to move on or else charge her for being a nuisance and causing obstruction to traffic. Rich so what? Rules are rules and you are the authority. Scratch or not.. let IDAC decide."

"We are only listening to only one side of the story so why make so much comments? I drove pass the accident scene and witnessed (Siti) being very rude to the Ferrari lady pointing finger and shouting at her," commented Cheerlyn.

"Obviously, this van is tailgating the car very closely and hence resulted in this accident.

"I don't think this is right to shame her on media like this.

"I saw a kid in her car too and I don't think for any funny reason she wants to jam brake knowing that her kid was seated beside her, definitely she wants to be a safety driver too."

Can you find the scratch? You can watch the video and let us know what you think in the comments section.