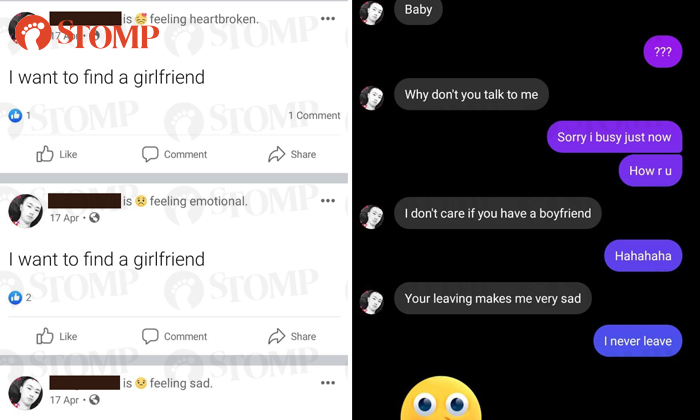 A man who kept messaging Stomper J's girlfriend on Facebook got a rude shock when he video-called her.

According to J, his girlfriend and the man are Facebook friends.

J said he decided to pretend to be his girlfriend in order to troll the man.

He told Stomp: "This guy is so desperate. He kept messaging my girlfriend and wanting to mess with her, so I logged into my girlfriend's Facebook Messenger account.

"I pretended to be my girlfriend and talked to him."

In screenshots that J shared with Stomp, the man initially does not appear to be aware that he iwas being trolled.

J added: "I then video-called him. But when he saw me, he hung up."

Upon realising what was happening, the man said he had nothing to talk about with men. He also sent the Stomper a gif calling him "despicable".

J replied, "Hahahahaha. If I am despicable, and you want a girl who has a boyfriend, then what are you? Hahaha."

The man then responded, "Sorry. I didn't want [your girlfriend]. I just saw [her before], but did not sleep [with her]. Sorry."

J told the man, "Then why did you say you didn't care if she had a boyfriend? For goodness sake, how old are you this year? Go look for our own happiness, ok? Don't harass women who are already attached."