Father of boy attacked at Yishun playground: Autistic son hugged man as he wanted to play together 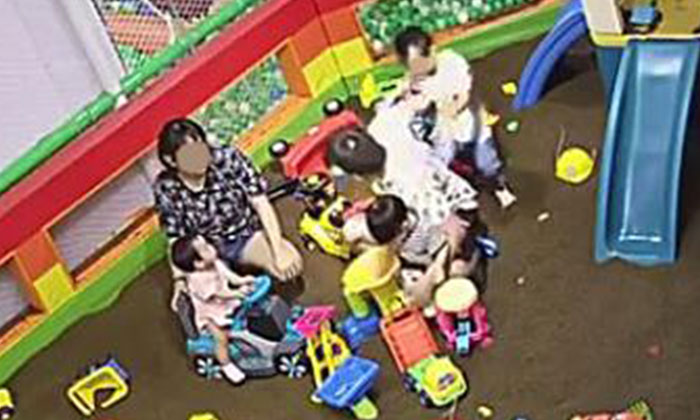 A police spokesman told Stomp that the man in the video has been identified, adding:

"He is now assisting the police with our investigations."

The father of a boy who was caught on video being assaulted by a man at a Yishun indoor playground has clarified that his son, who is autistic, had merely wanted to play with the man and his family.

Mr Luo, 47, told Shin Min Daily News that he had not expected his son’s actions to cause a misunderstanding, and hopes that the public will be more tolerant towards children with special needs.

The incident which happened at the Sunshine Childhood Playland in NorthPoint City on Monday (April 9) saw the five-year-old boy getting shoved and kicked by the man after approaching the latter from behind.

The man’s actions were caught on closed-circuit televisions (CCTVs), although he denied hitting the boy when he was confronted by his mother.

The boy’s mother, Ms Ow May Chen subsequently posted the CCTV footage on Facebook and made a police report.

The video quickly went viral, and many netizens were appalled at the man’s actions.

Enraged netizens felt that even if the child was in the wrong, that was no need for the man to treat him so roughly, and he could have spoken to the boy’s parents.

Some netizens also felt that the boy and his mother were at fault, blaming Ms Ow for allowing her child to run amok.

Mr Luo has defended his wife and son against the latter comments, saying that the netizens were being unfair.

He told reporters that the boy was his fourth child, and when he was one, the family discovered that he did not respond when they called out to him,

They later visited the doctors and the child was diagnosed with autism.

Said Mr Luo: "Although he is autistic, it does not mean that he doesn’t like to interact with others. He’s actually a good kid and loves to play with other children.

Mr Luo explained that act of leaning on the man’s back was actually a sign of friendliness.

He said: "My son was going to hug him to gain his affirmation, so he could play with his kids. I can comprehend my child’s action but not everyone is the same.

"For those who misunderstand, they may view it as an attack.

"As for the parts where my son hit the man, it is just due to his reflexes kicking in after getting pushed."

Mr Luo revealed that he has been teaching his son how to behave in public for the past three to four years, but said that he hopes the public will be more understanding.

He said that when his wife confronted the man over his violent behaviour towards their boy on the day of the incident, the man had asked her whether he needed to wait until the boy knocked into his kids before taking action.

Mr Luo added: "Throughout the whole incident, my son did not know that he was being bullied, and never complained to my wife at all.

"It was only that night when he was taking a bath at home, that he told my wife that his abdomen and area around his groin were hurting.

"He told her that the 'uncle' at the playground was very fierce, and we all realised that something was wrong.

"We got in contact with the people running the playground to try and understand the situation."

He also said that the matter is being currently handled by the police and he is relieved that his son was not hurt.

The boy has resumed attending his kindergarten classes.

In response to a Stomp query, the police confirmed that a report was lodged on Tuesday (April 10) and investigations are ongoing.