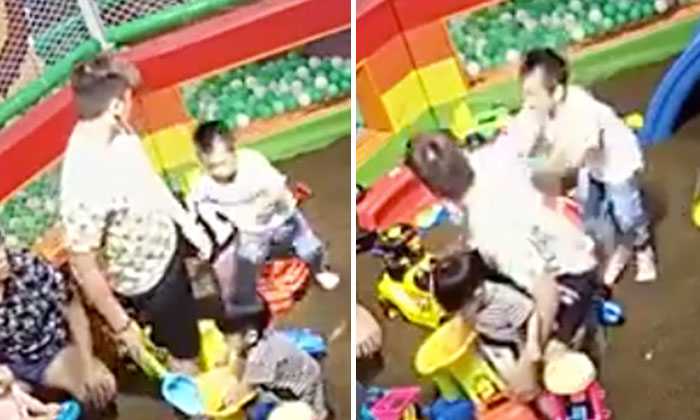 The police are investigating a case where a man kicked and shoved a boy at an indoor playground in Yishun.

The incident which happened at the Sunshine Childhood Playland in NorthPoint City was captured on closed-circuit televisions (CCTVs).

Footage of the incident became widely circulated after the boy’s mother, Ms Ow May Chen, shared it on Facebook.

In the video, the boy was first seen entering the playground where the man was.

The man was accompanied by a woman and two young children.

The boy then approached the man from the back.

In response, the man shoved him and kicked him.

However, the boy continued to approach the man.

The man then threw a toy shovel at a slide, seemingly to frighten the boy.

Nevertheless, the boy continued to circle the four of them, breaking into a sudden trot at times.

He later grabbed the man from the back.

The man pushed the boy away, and the child retaliated by hitting him on the back, before moving to get a toy that another kid was playing with.

The man, in a fit of rage, threw the toy across the room. 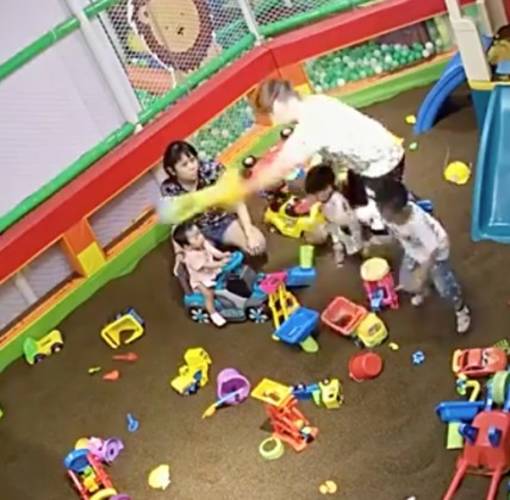 The boy proceeded to hit the man on his left arm, earning him a glare from the man.

Near the end of the clip, a woman who appeared to be the boy’s mother walked into the playground.

Ms Ow has since removed the video, citing that it caused "unnecessary inconvenience" to the playground owner who had given her the footage so she could make a police report.

She said in her post that she confronted the man over his belligerent behaviour towards her son, but the man reportedly denied her accusations.

“We are just so shocked and sad after watching CCTV footage.”

She said, however, that she should share ‘some responsibility’ for what happened, as she did not keep a close eye on her son for ’90 seconds’.

“The police confirm that a report was lodged, and investigations are ongoing.”

The video has incurred the fury of many netizens who commented that what the man did was setting a poor example for his children.

Many thought that he should have spoken to the boy's parents instead of reacting violently.

However, others criticised Ms Ow for overreacting and allowing her child to run amok, harassing the man's family.

According to The Local Society, a comment by a Facebook user claiming to be the boy's sister alleges that the boy is autistic.