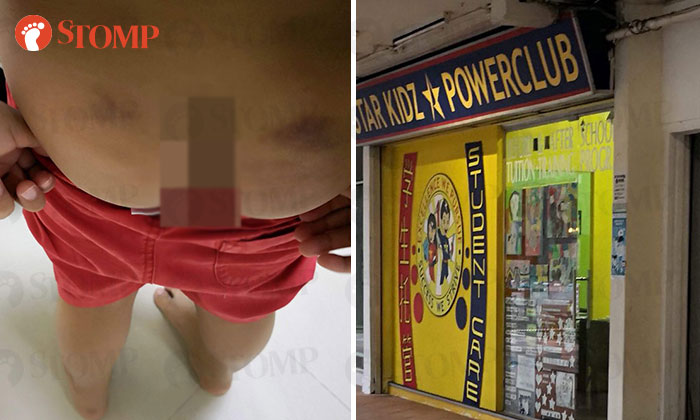 A boy was allegedly beaten on his backside with a wooden ruler by a principal at a childcare centre after opening a toilet door while a girl was inside.

Stomper llva, the boy’s mother, alerted Stomp to the incident on Thursday (Feb 8).

In a phone interview, llva described how she had found red marks on her eight-year-old son’s backside last Saturday (Feb 3) and lodged a police report the following Tuesday (Feb 6).

Ilva’s husband discovered the marks  as their son was showering after swimming between 6pm and 7pm.

He told his wife about the marks and llva confronted her son over the marks at about 9pm.

The boy told her that he had been beaten by a teacher at the childcare centre for 'talking in class' but did not elaborate.

Classes for her son would start at 1.30pm and end at 7pm. 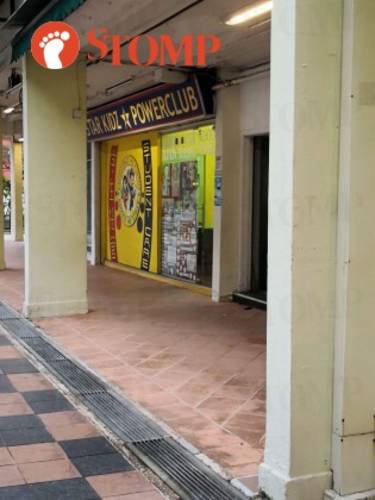 The centre is run by Mr Ryan Choo, an ex-TCS actor, and two female teachers.

After confronting her son, IIva then sent photos of his backside to Ms Sim, a teacher at the centre, via WhatsApp on Saturday night (Feb 3).

After receiving the photos, the teacher called llva, explaining that her son was punished by Mr Choo after the boy opened the door to a toilet while a girl was inside.

She told llva that she would check on the incident before hanging up.

IIva later received a call from Mr Choo on the same night, explaining that he had punished the child to pacify the girl’s incensed parents.

According to the mother, Mr Choo told her that he was afraid the girl's parents would take matters into their own hands.

In IIva's account and the police report provided, llva's son had been playing hide-and-seek with children at the centre at around 4pm on Wednesday (Jan 31).

During the process, he opened the door to a shared toilet as he thought one of his friends was hiding inside.

Unfortunately, there was a girl inside who was relieving herself.

At the sudden intrusion, the girl cried and asked for her parents.

As punishment for the act, Mr Choo reportedly asked the boy to bend over a table and proceeded to beat him on his backside with a wooden ruler.

The boy subsequently went home but did not tell llva about the incident.

Said llva: "Although he (Mr Choo) told us that it was to pacify the girl’s parents, we never heard from her parents since the incident, nor did they go to the centre.

"My son really just did it with no ill intentions, does it warrant a punishment like this?"

llva later visited the childcare centre on Monday (Feb 5) at around 5.30pm to confront Mr Choo.

He again told her that he had hit the boy backside with a wooden ruler.

He also pointed llva to the girl whom llva's son had walked in on the day of the incident.

llva lamented: "My son was hit on his backside for seven times! How can he not tell us after doing that?"

In response to a Stomp query, a police spokesman said: "The police confirm that a report was lodged. Investigations are ongoing.”

Stomp had contacted Mr Choo and Star Kidz Powerclub on numerous occasions for a comment.

After receiving IIva's call on Thursday (Feb 8), Stomp called up the centre and spoke to Mr Choo, who said that he was upset over the incident, and would need to think about what he could share.

Stomp tried calling the centre again later in the day but could not get through.

On Friday (Feb 9), Stomp called the childcare centre again two times in the afternoon and requested to speak to Mr Choo, but could not get to him.

Instead, Ms Sim answered the call and told Stomp that the childcare centre did not have any way to contact Mr Choo.

However, she later said that she could indeed get in touch with Mr Choo, and she would tell him to get back to Stomp.

She added that Mr Choo is a good person, but he had just made a mistake.

She also revealed that he was feeling drowsy as he was on medication, and was thus unable to speak to Stomp.

However, Ms Sim said that she would convey to Mr Choo that Stomp was looking for him.

Mr Choo called Stomp back in the evening and said that he would be willing to give his comments on the incident, and asked the team to wait until his drowsiness wore off the following afternoon.

On Saturday afternoon (Feb 10), Stomp called Mr Choo again and asked for his comments on the incident.

However, he told Stomp that he did not wish to make any comments.

Related Stories
Toddler slapped and threatened while learning math -- despite asking to be 'taught lovingly'
Man at mini-mart kicks 5-year-old boy on scooter, then slaps his face: Police investigating
Woman brutally flogs child until she is wincing in pain and struggling to breathe
More About:
child abuse
childcare
police
school