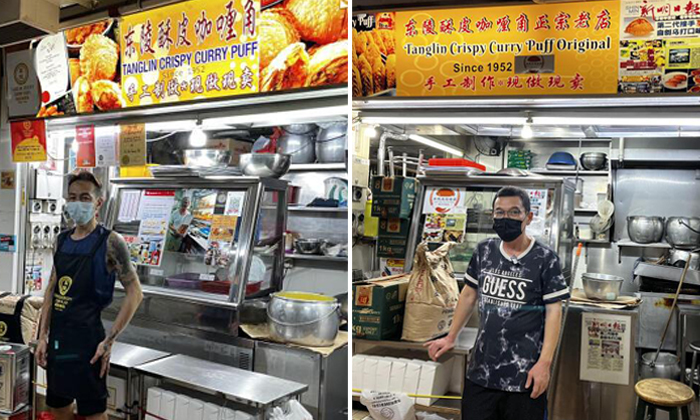 They say you should never do business with friends. But it isn't always roses when it comes to family enterprises either.

Case in point here would be the Ng brothers – Peter, 56, and Ray, 50, – who used to helm popular curry puff stall Tanglin Crispy Curry Puff at Hong Lim Market and Food Centre together.

After a dispute, the brothers have since gone their separate ways, each running a curry puff stall on their own. But while they may be estranged, their businesses are in very close proximity – literally one unit from the other.

As at last month (April 2022), Ray set up a rival stall just one unit away from the old outlet, leaving customers confused over which one is the original.

Addressing the change, older brother Peter said in a Facebook post on April 24: “There are so many rumours going around (about) the two stalls; who is the good one and who is the bad one. I started working with my dad first in Hong Lim Food Centre."

Their 86-year-old father Ng Yong Cheong, who founded Tanglin Crispy Curry Puff in 1952, has moved from the old stall to the new one.

Speaking to Shin Min Daily News, Peter said he and his brother are not on speaking terms. According to him, Ray had previously left the business to pursue a career elsewhere. The stall was then transferred to Peter's name. However, conflict arose when Ray returned to the stall and became unhappy with the profit distribution.

In hopes of putting an end to the disputes, Yong Cheong proposed that the brothers split the businesses, Peter said.

Their father then gave Ray half a year to find another location to set up shop.

"My younger brother wanted to open a stall elsewhere with the original name, and promised he wouldn't be at Hong Lim Market and Food Centre, so I agreed to let him use the name," said Peter.

However, according to Ray, it was Peter who suggested the split and refused to return the stall to their father.

Yong Cheong then “had no choice” but to open a new stall in the same location, said Ray, who took over the reins of the new stall because of Yong Cheong’s poor health.

"Customers think that I started a new stall and that's why my brother's business is twice as good as mine.”

He also pointed to Yong Cheong's involvement with Ray's stall as another factor, and claimed that Yong Cheong would sit at the stall and help attract customers.

The situation got so tense at one point that their elder sister had to step in and mediate. Since then, Yong Cheong and his wife have reportedly not made an appearance at either stall.

Previously, there were two outlets – one at Block 20 Kitchener Road and one at Hong Lim Market and Food Centre.

The Kitchener Road outlet, which was helmed by Ray, has since shut down.