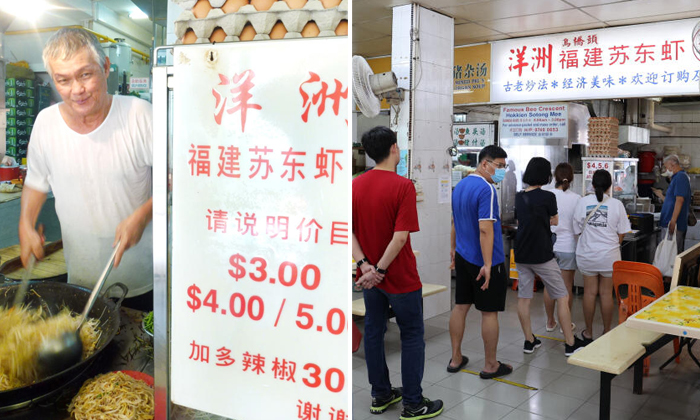 The 72-year-old stall owner, Mr Lim Bo Si, will be retiring at the end of July.

The popular stall was originally established at Lian Seng Eating House at Block 40 Beo Crescent in 1986, before relocating to its current spot at Block 127 Bukit Merah Lane 1 six years ago.

When Shin Min Daily News visited the stall on Tuesday (May 10), they found Mr Lim manning the stall alone. He was juggling taking orders, preparing and packing the food, as well as collecting money.

Mr Lim shared how he started learning his craft at the age of 16, when he was an apprentice to a well-known Hokkien mee hawker for two years and drew a monthly salary of $20.

He later opened his own stall, which he operates with his now 70-year-old wife, Huang Baofeng.

Mr Lim said: "It was very tough in the beginning. We had no customers and weren't making money. It took half a year to slowly build a reputation.

"I started out using charcoal fire to fry the noodles, but switched to a gas stove due to government regulations. Using charcoal makes the noodles more fragrant and is a greater test of skill as the temperature must be controlled properly."

Mr Lim also pointed out that the prices of his Hokkien mee ($4 to $6) and the ingredients used have remained the same over the years. However, oil prices have gone up by 100%, gas prices have increased by 25%, while the cost of his ingredients has risen by 20%. This means that even raising his prices by 50 cents would not help.

He added: "My customers have been with me for 20 to 30 years. Many of them are elderly people who are not working. How will they manage if I increase prices?"

Mr Lim's wife had also undergone another operation a month ago and is unable to stand for prolonged periods to due knee issues. He is unable to manage the stall without her help and therefore decided to close shop for good.

A notice at the Yang Zhou Fried Hokkien Mee stall states that its last day of operations is on July 30.