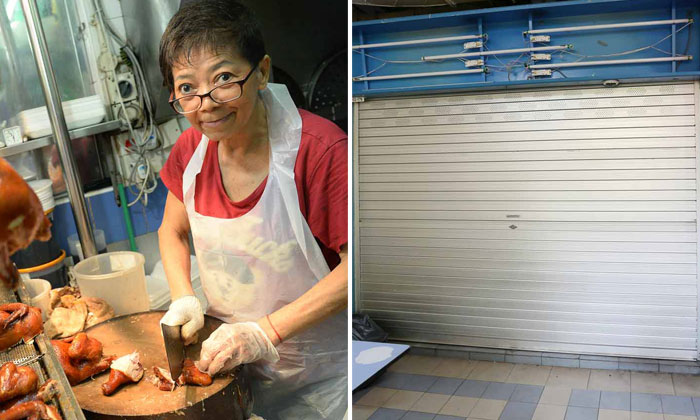 Patrons of the Chinatown Complex Food Centre were surprised to see that a popular food stall there appeared to have been suddenly shuttered without warning.

The stall in question used to be home to "Ma Li Ya virgin chicken", a well-established stall selling soya sauce chicken rice at the hawker centre. It is situated less than 50m away from the Michelin-starred Liao Fan Hong Kong Soya Sauce Chicken Rice & Noodle stall.

According to Shin Min Daily News, a patron to the food centre had seen people tearing down the signboard at the stall on Feb 4. Since then, the stall has remained shut, without any notice given announcing its closure.

However, a worker at a neighbouring drinks stall, Mdam Lai, told Shin Min that the stall had not closed down for good, but that its owner, Madam Siew, was merely taking a break.

Said Madam Lai: "I last saw Madam Siew on Feb 1. She told me then that it was her last day at this stall, and will be re-opening her business at another stall in two months."

Shin Min managed to contact Madam Siew, who said that she had chosen to move to a new location because her current stall owner had other plans for the stall, and that her new stall would be situated close by in the same food centre.

She also told the Chinese evening daily that she is planning to spend time with her family during her two-month break, and may even go overseas for a holiday to recharge her batteries before re-opening her business.

Madam Siew added that despite being shut for less than a week, she had already gotten numerous calls from regular customers who miss her soya sauce chicken, and asking when exactly she would be returning again.

Last year, Shin Min had reported that Madam Siew is believed to have been a teacher to Mr Chan Hon Meng, the man behind the Michelin-starred soya sauce chicken rice stall at the same hawker centre. She had also revealed that her success had been due to the soya sauce she uses, which is brewed based on a secret family recipe.