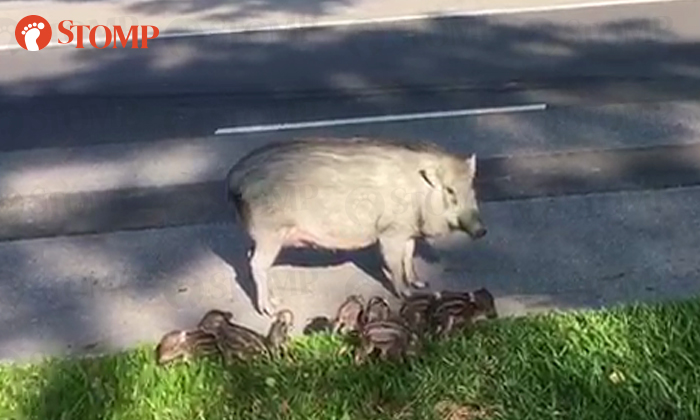 Stomper Leong and her husband were out near Jurong Eco Garden when they encountered a family of wild boars.

A video that the couple took last Thursday (Feb 18), at around 8.56am, shows an adult wild boar along a pavement with seven piglets.

Someone in the background can be heard making shushing noises at the boars.

Leong said: "My hubby and I were quite far away when we snapped this.

"It's worth letting them become adults.

"I've come across wild boars in the area many times. You can see how they have dug up the ground all along the lane."

According to the National Parks Board (NParks), it is natural behaviour for wild boars to dig up the soil in order to find food.

Like many other wild animals, wild boars will only attack if they are cornered or if they feel threatened. Female wild boars are very protective of their young and can easily be provoked.

Here's what you should do when you encounter wild boars:

Leong said that the family of wild boars did not react to her and husband.

However, not everyone has managed to escape a wild boar encounter unscathed.

Two people were injured and taken to hospital after separate wild boar attacks in Punggol on Saturday night (Feb 20), reported The Straits Times.

The same animal, a lone female that weighs about 40 to 50kg, is believed to be behind both incidents. It has not been found despite a 20-man effort to track it down over the weekend.

Mr How Choon Beng, director of wildlife management and outreach at NParks, said that the agency will continue patrolling the area and have put up advisories on what the public should do if they encounter wild boars.

As wild boars tend to stray into publicly accessible areas to look for human food sources, and can be a threat to public safety, they will be trapped and removed, Mr How added.

The latest attacks bring the number of wild boar incidents involving humans to four so far this year - up from three in the whole of 2020.