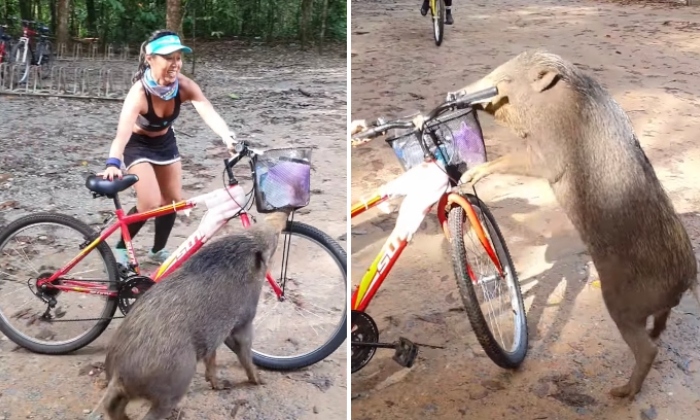 When nature lover and sports enthusiast Trisha went on a cycling trip with her four friends at Pulau Ubin, she did not expect to get up close and personal with a wild boar.

But the encounter on Nov 20 would have been hard to avoid, especially since the boar smelt the delectable curry puffs that Trisha's friend had placed in her bike basket earlier that morning.

Trisha told Stomp that she had no idea that the video would go viral, especially since she was not the one who first posted it on social media.

"After the incident, I went to the gym. During my workout, I started receiving texts from friends asking if I'm okay and I got really confused," Trisha shared.

"Many of them said they saw a video of me and a wild boar. So I checked social media, and realised that one of my friends had posted a video the encounter! It was hilarious how so many people caught wind of it so quickly."

Trisha then took to Instagram to share how the curry puffs got into her basket in the first place.

"The curry puffs weren't mine! I was carrying it in my bike basket for a friend. I had no idea that there was food in the plastic bag," Trisha laughed.

"I was about to park my bike at Chek Jawa and suddenly, a wild boar came towards me. He must have smelt the curry puffs and knew it was time for lunch.

"I remained calm and used my bike as a barrier while making sure that I wasn't hurting the boar.

"But my friends got pretty excited. They started screaming in the background as the boar pounced up to grab the food.

"It's actually so funny and adorable. You can see that a few curry puffs dropped out and it was deciding whether it should pick it up or just run off with what it already has."

As amusing as the situation was, Trisha said it served as a reminder to never bring food into Pulau Ubin and other trekking areas in Singapore.

"I did not bring food to Pulau Ubin that day. I only had a large bottle of water and three energy gels. I know that we must not bring food to such places as animals have an incredible sense of smell," Trisha said.

"I'm glad that many people watched the video because I believe that it will deter them from bringing poorly-packed food into such areas.

"If there really is a need to bring food in, make sure it is in an airtight container and placed inside your bag. And remember to only eat it in designated areas.

"I know the boar meant no harm when it was going after the curry puffs. It was just cranky and hungry!"

Trisha said that after the incident, her friends have been calling her the "wild boar lady".

"I guess that's my new nickname now! And I love it. I adore nature and wildlife and this encounter is something I'll never forget," Trisha shared.

"Who knows? I might even get a tattoo of a boar in the future." 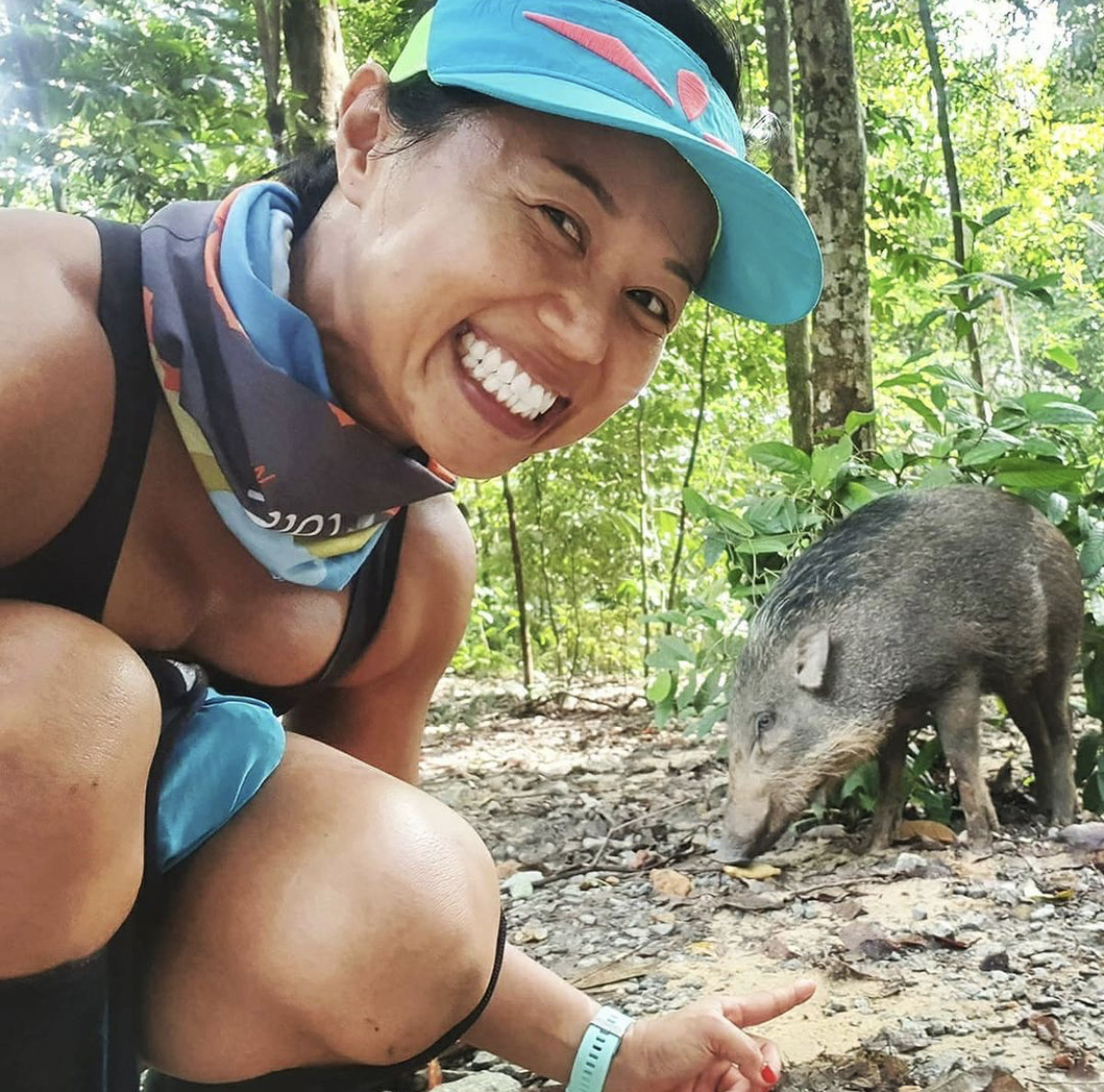 (Trisha and her "new BFF" after its curry puff meal)

In response to a Stomp query, Dr Adrian Loo, Group Director of the Conservation and Wildlife Management at the National Parks Board (NParks), said: "NParks is aware of the cases of a wild boar snatching food from visitors at Chek Jawa Wetlands in Pulau Ubin.

"We have also put up advisories on brochures, website and signage at Chek Jawa Wetlands and around Pulau Ubin advising the public against feeding wild boars.

"Visitors are also advised not to bring food into Chek Jawa or expose plastic bags, which may attract the wild boars."

According to NParks, here is what you should do if you encounter a wild boar:

Remain as calm as possible and move slowly away from the animal. Keep a safe distance and do not corner or provoke the animal.

If adult wild boars are seen with young piglets, keep a distance and leave them alone, as they are potentially more dangerous and may attempt to defend their young.

Members of the public may also call the Animal Response Centre at 1800-476-1600 or contact us to report any wild boar encounters.