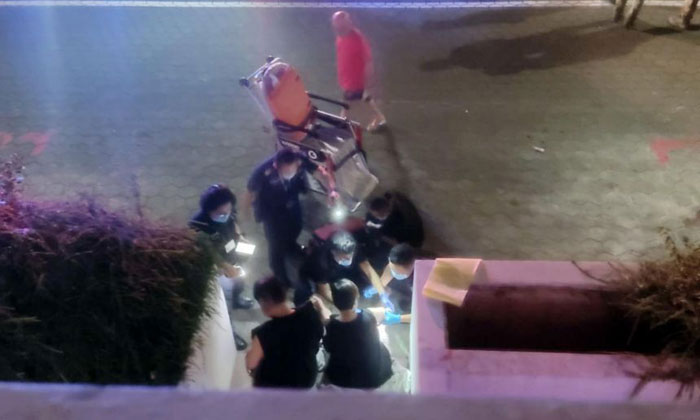 Both people were taken to Sengkang General Hospital by SCDF.

According to Chinese daily Lianhe Wanbao, the second attack occurred right below Block 310A, and involved a woman being bitten and dragged for nearly a metre by the wild boar.

An eyewitness told Wanbao that she heard the woman crying for help and called the police. Another resident used an umbrella to hit the boar while a food delivery rider rang his bicycle bell repeatedly to scare the animal away.

In a Facebook post on Sunday, Member of Parliament for Punggol West SMC Sun Xueling sent get-well wishes to the two people hurt in the attacks.

She wrote: "I have been in contact with the NParks (National Parks Board) and SPF (Singapore Police Force) since last night on the wild boar attacks in Punggol. They have been providing me updates throughout the day."

She added that 20 men were activated on Saturday night to look for the wild boar and were still searching for it to ensure that it would not go near residents.

NParks also put up signs along the waterway on Sunday to advise residents on what to do should they encounter a wild boar, Ms Sun wrote.

Dear Residents, My heart goes out to the two persons hurt by a wild boar in Punggol last night. I hope they recover...

On its website, NParks advised those who come across wild boars to be calm and move slowly away from the animal. They should not attempt to feed it, corner or provoke it, or use a flash while taking pictures of the animal.

Wild boars with young piglets are potentially more dangerous because they may attempt to defend their young and should be left alone, said NParks on its website.

The latest wild boar attack comes after a woman was attacked by a wild boar on Nov 17 last year while she was exercising in Sungei Api Api park in Pasir Ris.

The attack left the 50-year-old auditor, who wanted to be known only as Madam Yu, with a 10cm cut on her left leg and facial injuries, Shin Min Daily News then reported.