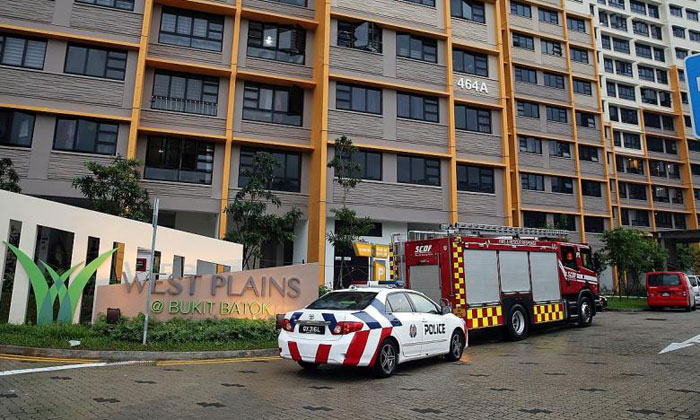 She was in the living room watching television with her parents and two children when she heard four blasts from the children's bedroom.

The 29-year-old, who wanted to be known only as Ms Ainn, a patient care worker, told Chinese-language newspaper Lianhe Zaobao that after the explosions, she saw thick smoke and fire coming from her children's bedroom.

In response to queries from The New Paper, a spokesman for the Singapore Civil Defence Force (SCDF) said it was alerted to a fire at Block 464A Bukit Batok West Avenue 8 on Saturday at 5.46pm.

The fire, which involved a battery unit of a personal mobility device (PMD) in the bedroom of the flat, was extinguished by the occupants before SCDF's arrival, the spokesman added.

"Two adults and two children self-evacuated from the unit before SCDF's arrival, and one person from the unit was taken to Ng Teng Fong General Hospital," the spokesman added.

Ms Ainn told Zaobao that she had fled to her neighbour's flat with her mother and children and asked her neighbours to call SCDF while her father extinguished the fire using a hose from the bathroom.

She said he managed to put out most of the fire before the SCDF arrived.

The situation was so chaotic that her two children, aged three and five, were crying and in shock.

Her mother felt faint and dizzy after inhaling the smoke and was taken to hospital.

"The damage is not too serious as the fire was contained within my children's bedroom.

"So we will still be staying in this flat for now," she told Zaobao.

Ms Ainn added that prior to the fire, her father had been using the PMD to get to work daily, despite her repeated reminders for him not to.

"There has been an increasing number of fires involving PMDs these days, so I was worried about such an incident happening to us," she said, adding that her father does not plan on using a PMD again.

SCDF reminds the public to prevent such fires by following the safety tips found at go.gov.sg/pmdfiresafetytips.