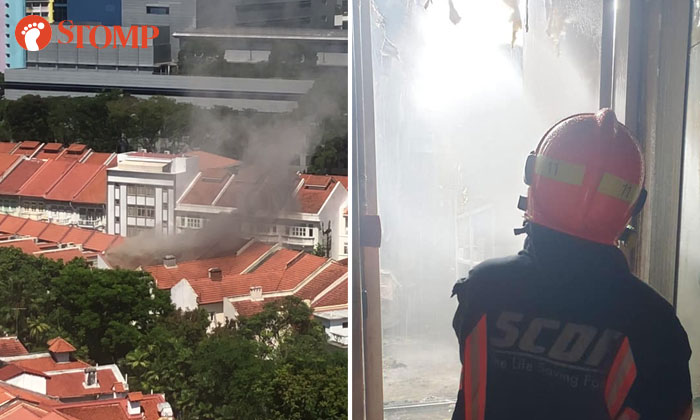 Two firefighters were taken to hospital after a fire broke out at 31 Teo Hong Road in Tanjong Pagar on Tuesday morning (June 15).

Stomper Justin alerted Stomp to the fire and shared videos he took of smoke rising from a shophouse.

The Singapore Civil Defence Force (SCDF) said in a Facebook statement that upon arrival, thick smoke was coming from the building.

Firefighters were equipped with breathing apparatus sets before proceeding into the smoke-logged shophouse.

"The fire at the ceiling on the third floor and the attic of the shophouse was extinguished with three water jets at about 1.15pm," SCDF said.

"Two career firefighters were conducting firefighting operations on the third floor when segments of the ceiling fell onto them.

"Both firefighters who were in full personal protective equipment (PPE) including helmets, were immediately evacuated.

"They were assessed by an SCDF paramedic.

"One of the firefighters was conscious when conveyed to Singapore General Hospital while the other firefighter was treated at the site for minor scratches.

The occupants from the shophouse had self-evacuated prior to SCDF's arrival while about 20 other occupants from neighbouring units were evacuated by SCDF as a precautionary measure.

Damping down operations are ongoing and the cause of the fire is under investigation.

Related Stories
'It was too late': Residents rushed to douse flames on man who died after PMD caught fire in lift
Porsche catches fire in Bishan
20-year-old man dies after PMD fire in Woodlands lift
More About:
fire
scdf
firefighters