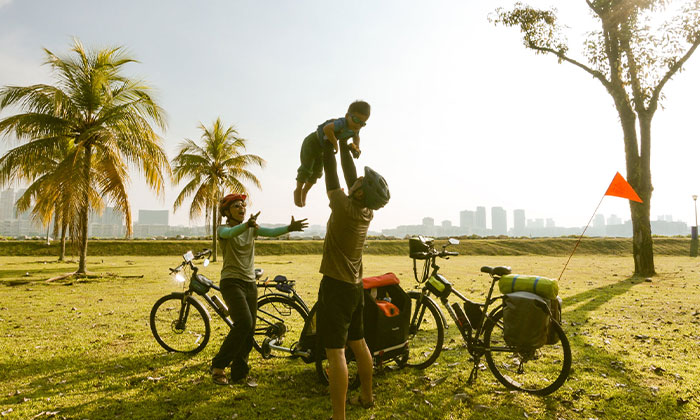 Cycling is a popular recreational activity among Singaporeans and many have set personal goals to complete a Round The Island (RTI) challenge.

One couple did just that and brought their two-year-old toddler along for the ride.

In her post, which has garnered over 1,300 likes in the Facebook group and over 400 likes on her personal page, she praised NParks for making cycling routs across the island extremely safe fo her family.

RTI Day 4: The smell of Punggol was so good! We finally completed the RTI with a total distance of 172km in 110hrs. That...

Carol acknowledged that other parents would not even attempt to bring a toddler around the island while cycling but she said she wanted to share her experience to help and inspire others to try it.

"Our friends thought we were crazy to bring a two-year-old on this cycling adventure," she wrote.

"Can the two-year-old take long rides? Wet? Dusty? What if there's no park connector (PCN) or footpath? Where do we stop for breaks? What if the bicycle breaks down? What if the toddler melt[s] down?"

She admitted she did not have the answers either but decided to just go for it, starting with a backpack carrier when Atlas was three months old before moving on to a child's seat mounted on one of their bikes and now, a trailer.

Carol said it was a gift for his first birthday and is a "first-class seat".

"Fully shaded and protected from the elements, we added cushions, fans and speakers, there's even a storage for his snacks, drinks and toys," she wrote.

"A gentle call will summon someone to attend to him. The trailer is also crash tested with fully protected alloy roll bars.

"With more assurance, we took longer rides up to 60km within a day.

"Sixteen months later, the idea of a multi-day RTI was then natural.

She shared photos taken at various pit stops on their cycling adventure for memory's sake.

"Atlas might not remember this travel adventure, and that's okay! I myself don't even remember what I had for dinner last week, but that didn't stop me from feasting," she said.

"The important thing is his soul is filled, he's enjoying right now, it's written all over his face.

"To all parents who want to go on an adventure like this, yes it's possible!"

Related Stories
8-year-old boy completes dream of cycling 119km to raise funds for children's cancer research
Actress Jaime Teo needs surgery after breaking collarbone in cycling accident
Cyclist argues with pedestrian who did not give way to him along footpath: 'You got no balls?"
More About:
cycling
cyclist
cyclists
amazing
parents
toddler