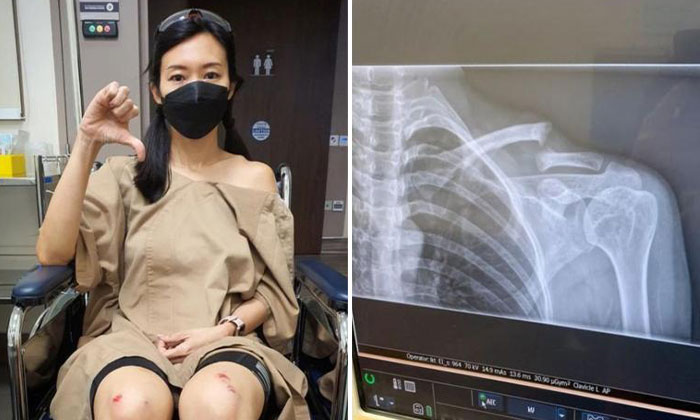 Host-actress Jaime Teo, who is an avid cyclist, suffered a broken collarbone and will have a bone graft surgery this week after a biking accident last Friday (March 25).

In an Instagram post, she shared photos of herself in a wheelchair with bloodied knees, an x-ray film, a close-up of her collarbone and her damaged bike with its back wheel lying on the ground.

She wrote: "S&%$ happens. I was trying to overtake a big group of cyclists at Marine Bay Sands, sped up and crashed at speed into a cyclist who suddenly turned right.

"I should've cycled slower, should've rung my bell or they could've signalled or could've looked back before turning. All the could'ves and should'ves doesn't change the fact that I've now got a very broken collarbone and will need a bone graft and surgery next week."

She added that the cyclist she had crashed into was unscathed, as was his bike.

The 44-year-old, who often shares about fitness on Instagram, also mentioned that she had suffered the same injury before and knew how to handle it.

However, she still could not help feeling down as she had to cancel a few jobs, including one she had been looking forward to, which was to film a cycling trip on the Park Connector Network.

She also expressed thankfulness, saying: "I didn't get worse injuries like broken ribs or legs or head."

In a comment on a separate post on Sunday, she gave an update on how she was coping, saying she was wearing a sling and was on painkillers while awaiting surgery.