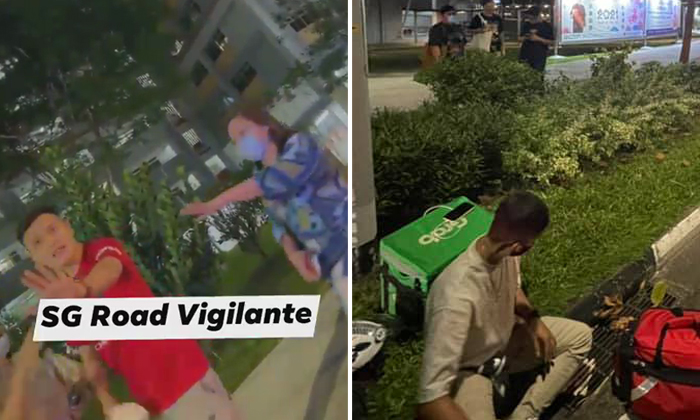 Two men were taken to hospital after an accident involving their motorcycle and a car in Choa Chu Kang on Tuesday night (Feb 19).

In response to a Stomp query, the police said they were alerted to the accident along Choa Chu Kang North 6 towards Choa Chu Kang Way at 9.47pm.

According to Lim, the car driver had reversed "without checking his blind spot" and knocked into a motorcycle behind him.

The motorcycle was carrying a father and son, who suffered "some pain and injury" and agreed to let Lim call the ambulance.

However, this upset the car driver and his family members.

Lim recounted: "Minutes later, a lady came screaming and shouting at me, asking why I was so 'kpo' to call the ambulance and why couldn't they have sent the riders to the hospital using their car.

"My reply to them is that the riders had injuries and so it was not advisable to move them around without professional care."

A video that Lim posted on Facebook shows an argument occurring at the accident scene.

In the video, a woman can be heard complaining in a mocking tone: "There are people who come ah, suddenly come out of nowhere... and say, 'Eh I can be the eyewitness!'

"Wah so easy, every accident also, 'Eh I can be the eyewitness!' when actually nothing happen. Waaah, I am so amazed by it."

As she continued her tirade loudly, a man can be heard telling her: "Stop it lah!"

Another woman, who identified herself and the first woman as the driver's family members, can subsequently be heard asking Lim: "What did you do?"

When Lim said that he had called the ambulance and the police, the woman responded: "I want to know why you do that."

The first woman chimed in and said: "You mean I cannot send him to the hospital myself?"

Lim then tried to explain why that was not appropriate, but the second woman asked where the motorcyclist was and said: "Is he very injured?"

He also told the women to "be fair" and clarified that he was not targeting the driver, as there was nothing wrong with him calling the authorities.

This accident happen at cck north 6 . The young guy did a reverse without checking blind spot and knock into a...