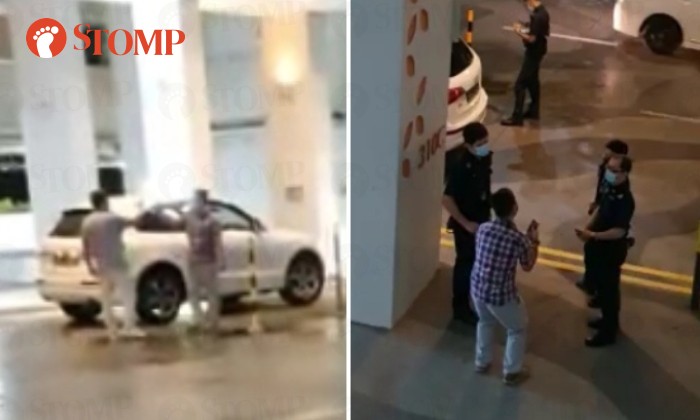 Two men were allegedly involved in a case of voluntarily causing hurt after a dramatic argument broke out between both men at Block 310C Punggol Walk on Friday (Jan 8).

Stomper Drool, who is a resident in the area, said he was heading home when he heard loud shouts coming from the drop-off point.

This led to the Citroen driver following the Audi driver to Punggol Walk, which led to a confrontation and eventually a heated argument.

In the video, the pair can be heard yelling while pointing at each other.

Both men then whip out their phones and begin recording videos of each other, as one man shouts: "Take, take, take! Better still, never wear mask."

Both drivers continue to argue as the Citroen driver says: "You think you drive Audi big la!"

The argument gets even more heated up as both men start shouting and hurling insults at each other.

A GrabFood rider then appears and both men attempt to explain their sides of the story.

The rider can be seen remaining silent, before saying: "You are adults, you are adults. You all shout ah, won't settle."

Subsequent clips show the rider attempting to mediate the dispute as both men continue pointing and shouting at each other.

In the last clip, which seems to be taken from the second level of the block, the police can be seen at the scene. One of the men appears to explain the situation to them, although most of what he says is inaudible.

According to Drool, who remained at the drop-off point for the entirety of the argument, it was the Audi driver who called the police.

"I assume both of them are not residents here. They didn't even bother to cool down after some residents explained to them that they are disturbing the whole neighbourhood," Drool said.

"One resident who stays at Lobby One could even hear the noise that they created by shouting at each other. These men are very selfish and arrogant."

In response to a Stomp query, the police said they were alerted to the case of dispute at 7.33pm.

"It was established that two men, aged 40 and 43, were allegedly involved in a case of voluntarily causing hurt," added the police.

No injuries were reported and the police are looking into the matter.