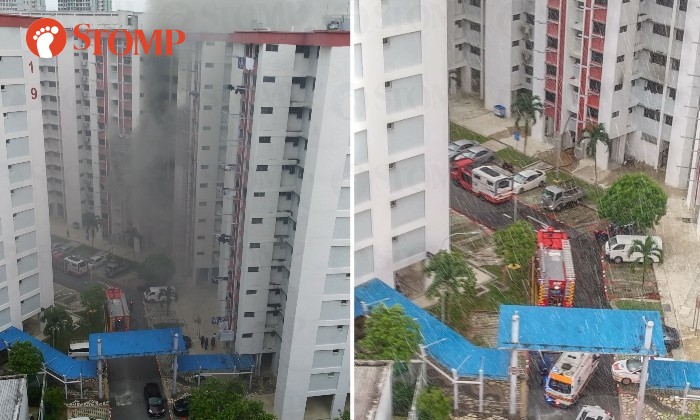 Explosions could be heard as a fire broke out at Block 120 Marsiling Rise on Tuesday (Oct 4).

Sharing videos and photos of the incident, Stomper Lydia said that she heard a few explosions.

An explosion can be heard in one of the videos, which also shows thick smoke coming out of the block.

"There was a sudden heavy downpour. Otherwise, the black toxic smoke might have worsened," said the Stomper.

"I pity the poor neighbours, especially those above and below the affected home. Much appreciation for the diligent firemen who helped stop the fire and extinguish the dark smoke at a fast pace, probably more than two hours."

In response to a Stomp query, SCDF said it was alerted to a fire at about 2.35pm.

"SCDF firefighters conducted forcible entry into a unit on the third floor and extinguished the fire with two water jets. The fire involved the contents of a living room," said SCDF.

"About 80 people from neighbouring units were evacuated as a precautionary measure."