Elderly woman bleeds from head after falling down at Cassia Crescent 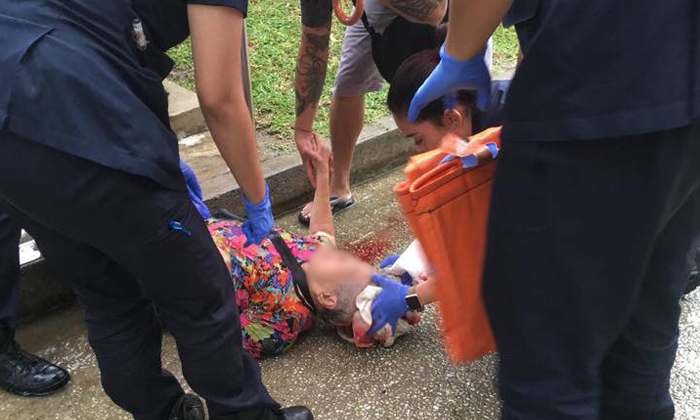 An elderly woman was taken to hospital after falling down near Block 28 Cassia Crescent on Monday (Nov 19).

The Singapore Civil Defence Force (SCDF) told Stomp that it was alerted to the incident at around 4.35pm and conveyed one person to Raffles Hospital.

Stomper Marcus alerted Stomp to a photo posted by Facebook user Zane, which showed the woman lying on the road, near some steps, as paramedics attended to her.

The woman appeared to be bleeding from the head and there was also blood on the ground.

Zane and another man, who can be seen holding an umbrella over the woman, helped to keep her conscious while they waited for an ambulance.

When contacted by Stomp, Zane said: "We called 999 and 995. We also held her hand and kept talking to her to keep her conscious."

Zane, whose post has garnered over 7,700 shares to date, also told Stomp that he plans to visit the elderly woman in hospital on his off day from work.

Related Stories
Man shares how he felt "true happiness" when helping injured uncle at Circuit Road Food Centre
Man lies in pool of blood after tripping on escalator at Bishan MRT Station
Elderly man trapped for an hour after falling into canal at Loyang Way
More About:
fall
injured
elderly