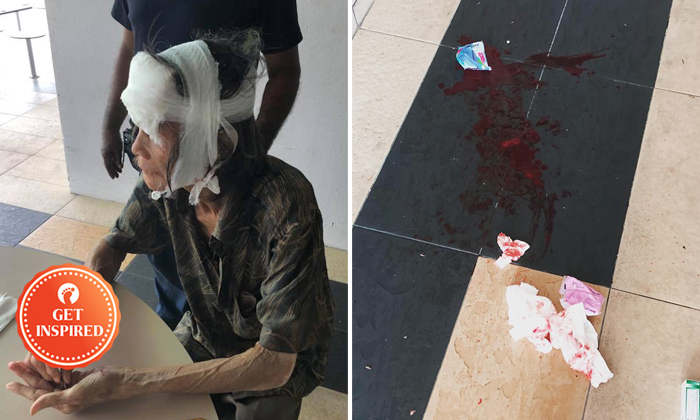 A man in his 60s was found bleeding and injured at Circuit Road Food Centre on Thursday afternoon (Oct 18), with several passers-by going to his aid.

The Singapore Civil Defence Force (SCDF) told Stomp that it responded to the incident at Block 79A Circuit Road at about 1.05pm and conveyed one person to Raffles Hospital.

Facebook user Alan Ho shared photos of the incident in a post titled "Saving a life is more meritorious than building a seven-storey pagoda", which Stomper Kohji alerted Stomp to.

In the pictures, the uncle can be seen with his head bandaged. There was also blood on the floor.

When contacted by Stomp, Alan said the uncle had gotten injured after a fall.

He told Stomp: "According to the uncle, he said his legs gave way when he reached the hawker centre.

"We suppose he fell face down, which explains the one to two-inch gash in the middle of his forehead. It was so deep that we could see flesh and probably bone too."

Alan described how he felt "true happiness" and "even touched" when the uncle asked about him "while drifting in and out of consciousness".

According to Alan, the man did not have any identification on him and could not say whether he had any family.

Besides helping to pick up his money, passers-by also apparently gave the man cash as he appeared to be worried about medical fees.

Alan added: "While I was attending to [the] uncle, many wanted to help but had not much idea how to. I told them I'd called the ambulance, [and to] please assist to flag down the ambulance along the road."

Alan also said that "not one person started videoing the incident because [we] all were genuinely trying to help", adding that the photos had been taken by a colleague to explain why they were late for work.

"Sharing this is to bring awareness to as many people as possible, that while many parts of the world are crumbling and in chaos, whatever and however little effort we put in to make the world a better place, it still makes a difference," wrote Alan.

Stomp has reached out to Alan for more info.

Related Stories
Elderly man trapped for an hour after falling into canal at Loyang Way
Elderly siblings found unable to move in Circuit Road flat: Here's their heartbreaking story
Thai cave rescue: These are the heroes who made it all possible
More About:
inspiring
kudos
heartwarming
injured
elderly
rescue
fall