Elderly pedestrian dies after getting run over by truck: 'I heard a scream and cracking sound' 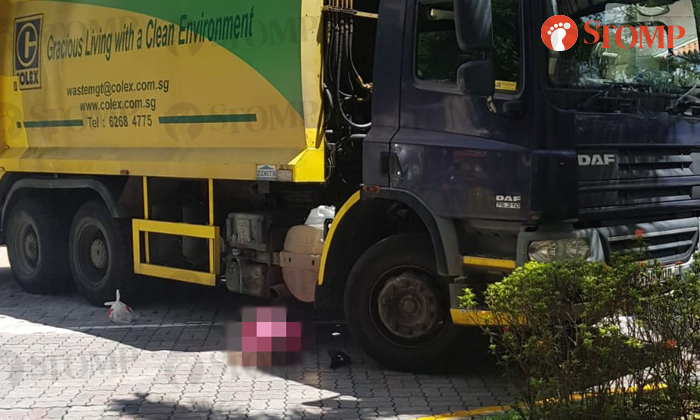 A 72-year-old pedestrian died after being run over by a rubbish truck near Block 179 Yung Sheng Road on Monday afternoon (June 10).

In response to a Stomp query, the police said they were alerted to the accident at the service road in front of the block at 12.57pm.

The elderly man was pronounced dead by Singapore Civil Defence Force (SCDF) paramedics at the scene.

The truck driver, a 47-year-old man, was arrested for causing death by a negligent act.

Stomper GK, a resident of Block 177, contributed photos showing the man underneath the truck. Blood can also be seen on the ground.

She told Stomp: "The truck was collecting rubbish from my block and went towards Block 179 when the accident happened.

"The truck’s tyre went over the man’s legs and then his head.

"I heard a scream and a cracking sound.

"A worker at the scene called the police, but could not communicate with the person on the line and passed the phone to me."

According to GK, she saw the driver and his colleague exit from the truck.

"The driver looked devastated," she added.

Stomp has contacted the rubbish collection company for comment.