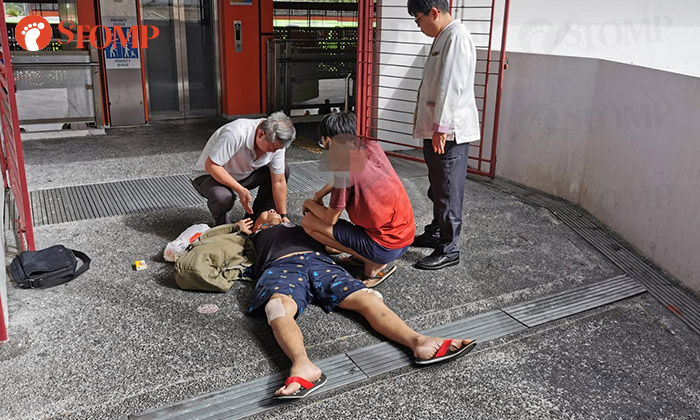 An elderly man in his 60s was taken to hospital after a Stomper saw him lying down at Woodlands MRT station on Friday afternoon (Jan 3).

Stomper Lim contributed photos of what he saw and said: "I just alighted from a train at the MRT station and was walking towards the bus interchange when I saw the elderly man lying on the ground near the passenger service counter.

"I didn't see what happened because when I was there, he was already on the ground.

"I was about to help because I'm trained in first-aid but I saw a lady in uniform and another man come to help the elderly man.

"The man, who wasn't in uniform, was giving the lady instructions on what to do.

"I saw a young man in red with the elderly man but I don't know if he is a relative.

"While I was waiting for my bus, I saw the ambulance arrive.

"The elderly man was conscious but I don't know if he said anything. I was standing quite a distance away as I didn't want to disrupt them.

"I feel that this is quite impressive. It's a good act where people rushed to help the elderly man."

Responding to a Stomp query, the Singapore Civil Defence Force (SCDF) said: "On Jan 3, SCDF responded to a call for assistance at Woodlands MRT station at about 10.10am.

"A man was conveyed to Khoo Teck Puat Hospital by an SCDF ambulance."

Stomp understands that the man taken to hospital was in his 60s.