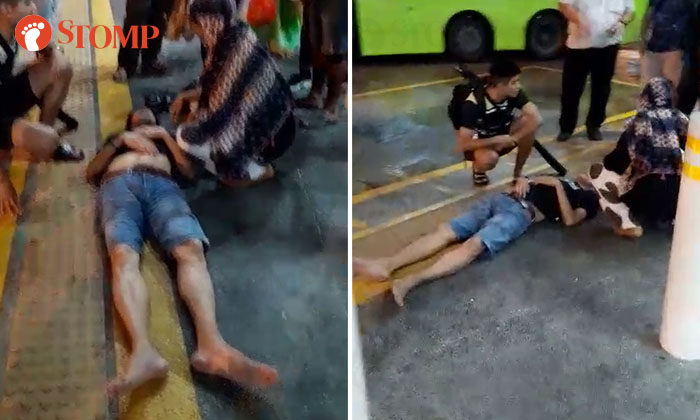 A man was taken to hospital after he collapsed onto the ground at Tampines bus interchange on Saturday night (Dec 14).

Stomper Gary was returning home at the time. When he alighted from a bus at Tampines bus interchange, he heard someone shout: "Oi!"

He contributed videos of what he saw and told Stomp: "After the man shouted, many passers-by noticed and a crowd started to gether.

"I didn't see the man fall. He was already on the ground."

Gary added: "He fell very near the edge of the pavement, so people moved him closer in and away from the road.

"They tried waking him up but he didn't. Then, a lady checked his pulse and I heard her say that the man's alive.

"Someone found a passport on him and found out that he's a 49-year-old Filipino but his eyes were closed, so they couldn't really verify his identity."

"I've never come across such an incident so I didn't really know what to do.

"I just filmed the videos and sent it to Stomp."

In response to a Stomp query, the Singapore Civil Defence Force (SCDF) said: "SCDF responded to a call for medical assistance at Tampines Bus Intercange at about 9.45pm on Saturday (Dec 14).

"A person was conveyed to Changi General Hospital."