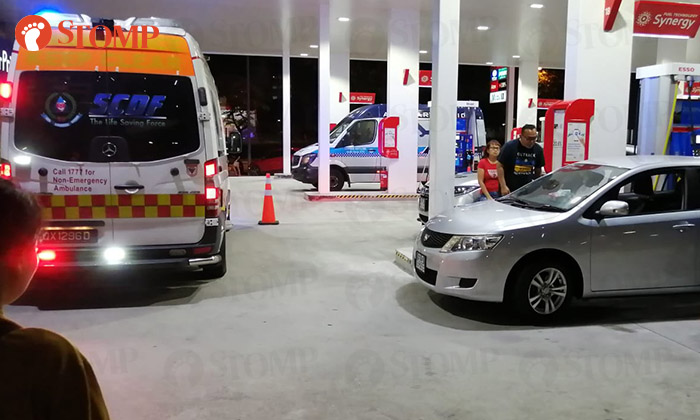 A woman was taken to hospital after fainting in her car at an Esso petrol station at 50 Choa Chu Kang Avenue 3 on Wednesday night (Jan 1).

A Stomper contributed photos and a video of the incident as he passed by at about 11.45pm.

He told Stomp: "It was a woman who had fainted in her car.

"Her car is the silver one in the photos I sent.

"The petrol station staff had tried to wake her up because she was sleeping in her car for about an hour.

"They were also the ones who called for an ambulance and I later saw the paramedics wake her up and bring her out of her car.

"I then saw the woman being taken into the ambulance."

The Singapore Civil Defence Force (SCDF) told Stomp that they responded to a call for medical assistance at 50 Choa Chu Kang Avenue 3 at around 10.35pm.

Stomp understands that the person who was taken to hospital was a woman in her mid-20s.