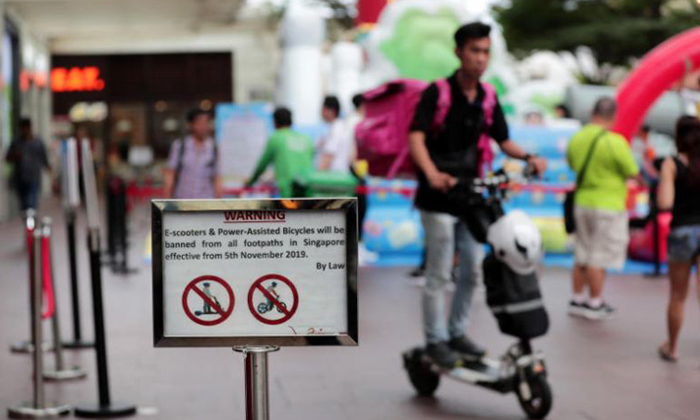 The police on Monday (Feb 10) warned pedestrians and personal mobility device (PMD) riders to "keep the peace and refrain from confrontations", citing a case where a rider used his belt buckle to hit a 72-year-old man last November.

The 33-year-old e-scooter rider, who had got into a verbal dispute with the elderly man while riding his device on the footpath, is expected to be charged with voluntarily causing hurt by dangerous means on Tuesday.

The elderly pedestrian in the incident had cuts on his forehead and was taken conscious to a hospital.

If found guilty, the e-scooter rider can be jailed up to three years, fined up to $5,000, or both for his actions.

In a statement on Monday in which the police said that they have observed more fights between PMD riders and pedestrians since the e-scooter ban from footpaths on Nov 5, the police also mentioned two more recent cases of such disputes, with violence displayed by both sides.

In one case, five PMD riders who were riding on a footpath hurled vulgarities and pushed a man who had filmed them. In the second incident, a pedestrian punched an e-scooter rider on a footpath after the rider tried to stop the pedestrian from filming him.

When asked for details on the number of fights observed, the police said they were unable to release figures.

The police, while reminding PMD riders to adhere to regulations on where to ride their devices, also warned that they "will investigate all reports and take action against those who intentionally harass or cause hurt to others".

Since the ban from footpaths, e-scooters can only be ridden on the 440km of cycling paths islandwide. Those caught flouting the footpath ban can be jailed up to three months, fined up to $2,000, or both.

The police added that anyone who wishes to report any criminal activity can do so at the police e-services website.

Related Stories
Uncle stops e-bike user from riding on cycling path even though it's not illegal, gets called 'donkey'
PMD rider who 'punched' BMW during Tanjong Pagar dispute arrested -- along with driver
PMD rider honks at pedestrian and scolds him for not giving way: 'We must share the path'
More About:
dispute
court
PMDs
pmd
e-scooter