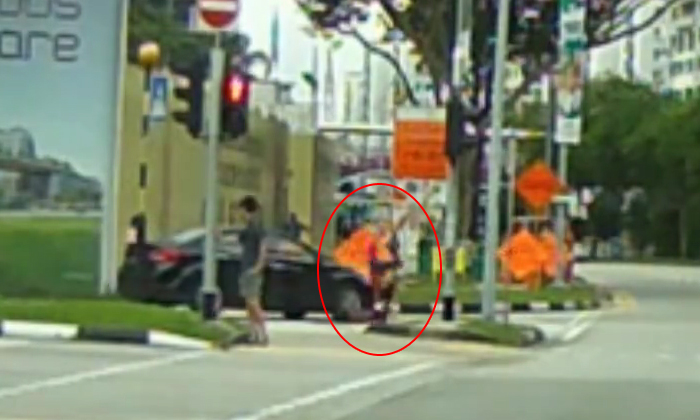 A food deliveryman was knocked off his e-scooter after getting hit by a car at a zebra crossing.

The accident occurred at a traffic junction before Woodlands Civic Centre, at around 2pm on Aug 28.

ROADS.sg posted a video showing what happened and said in its caption: "The rider was careless and ignored a pedestrian crossing's red light and when crossing the zebra crossing.

"A car driven by a lady knocked him off his scooter.

"This posting is to assist the lady driver in insurance claims and prosecution."

Reactions from netizens about the incident are mixed.

One user responded, "Be it walking or on mobility devices... you're supposed to stop and make sure approaching vehicles stop BEFORE crossing. So what if it's a zebra crossing? Be ignorant and abuse your rights and you shall get hurt. Don't blame others."

Another netizen on the other end of the spectrum commented, "Doesn't matter if he's riding an e-scooter or a bicycle or even a bloody horse. You hit the fella right in the middle of the zebra crossing. Driver loses the case."

"1) It is a zebra crossing. In theory, the driver has no right of way.

"2) But the zebra crossing is for pedestrians. Not for fast moving e-scooters (as fast as 25 km/h for LTA-approved models)

"3) Btw, e scooters are not allowed on the road! Technically, though he used the pedestrian crossing, he was still on the road.

Related Stories
Who's right, who's wrong? Cyclist confronts cabby for driving past zebra crossing ahead of him
Delivery rider can't tell the difference between footpath and road
Pedestrian knocked down by Merc driver SJF6519G was not using phone, police investigating
More About:
e-scooter
knocked down by car
reckless
rider
delivery
zebra crossing