Pedestrian knocked down by Merc driver SJF6519G was not using phone, police investigating 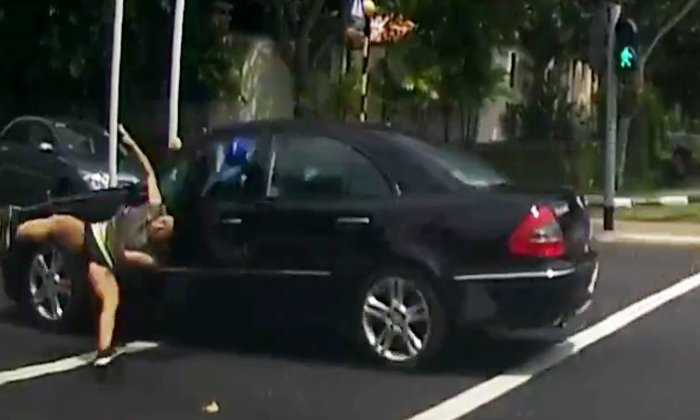 Police are investigating an incident where a female pedestrian was knocked down by a Mercedes-Benz while she was crossing the road at a traffic junction.

A video of the incident, which occurred along North Buona Vista Road on July 28 at around 11.50am, was posted on Facebook pages Beh Chia Lor - Singapore Road and ROADS.sg.

The footage had been captured by a witness known as Corden Fu.

The woman can be seen crossing the road after the lights turn green in her favour, when the accident occurred.

She later managed to get up, walk and collect her belongings from the road while a man, presumably the witness who had recorded the video, rushed over to help.

To clarify doubts about what exactly happened, ROADS.sg also said in an update: "Lady was not using her mobile phone but was drinking her coffee from a cup.

"The proof is in the beginning of [the] video as she approaches the traffic light with [a] drink in hand. The later part of the slow-mo where the cup of coffee was seen spilled onto the left windscreen of the Mercedez."

In response to media queries, the police said they were alerted to an accident involving a pedestrian and car at the junction of Holland Road and North Buona Vista Road.

Related Stories
Driver of Mercedes SJF6519G knocks down pedestrian at North Buona Vista Road
This is why children should be taught to look left and right before crossing the road
Things could have gone badly for man who ran across road after lights turned out of his favour
More About:
accident
shocking
pedestrian
mercedes