Who's right, who's wrong? Cyclist confronts cabby for driving past zebra crossing ahead of him 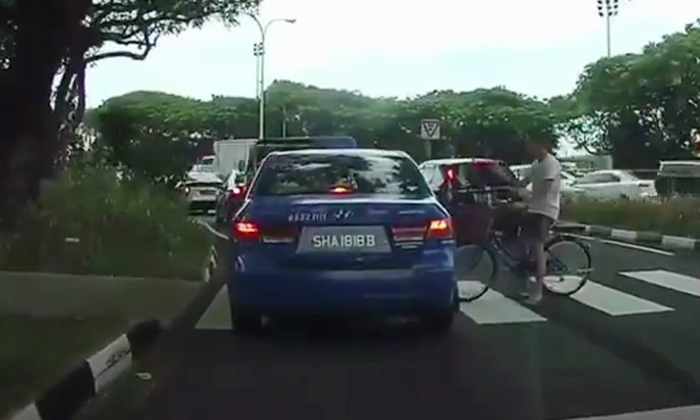 A video of a taxi driver and a cyclist travelling on a zebra crossing at the same time has sparked a heated debate over who is in the wrong and who has the right of way.

The clip, posted by Beh Chia Lor - Singapore Road on Facebook and credited to Tin Teng Yeong, shows how the cabby had been moving slowly and going halfway across the zebra crossing.

The cyclist then appeared and wanted to ride past the zebra crossing too, but was blocked by the taxi.

According to a caption accompanying the video, the cyclist then "rode up to [the cabby's] window, insisting he had the right of way."

He also stopped his bicycle on the zebra crossing and took out his phone, apparently to take a photo of the taxi.

Many netizens have slammed the cyclist and pointed out that he should have dismounted his bicycle before trying to cross the road.

Others, however, felt that the taxi driver was partly at fault too.

A netizen wrote, "Actually drivers are not supposed to block the zebra crossing...we are expected to wait behind the stop line till the vehicle in front clears."

Said another comment, "Taxi didn't make sure the pedestrian crossing is confirmed clear. He should slow down before zebra crossing and check left and right."

However, another user also pointed out, "It sometimes happens to us drivers... [we] cross thinking got enough space in front but miscalculated and end up stuck in the middle and blocking traffic... very paiseh."

Let us know what you think by leaving a comment below.

Related Stories
Driver jams on brakes to avoid hitting cyclist after she cuts in front of car -- then gets berated by her
If you love your life, don't use your phone while cycling
Lucky cyclist lives to see another day after nearly cycling into path of oncoming car
More About:
cabby
taxi
taxi driver
cyclist
zebra crossing