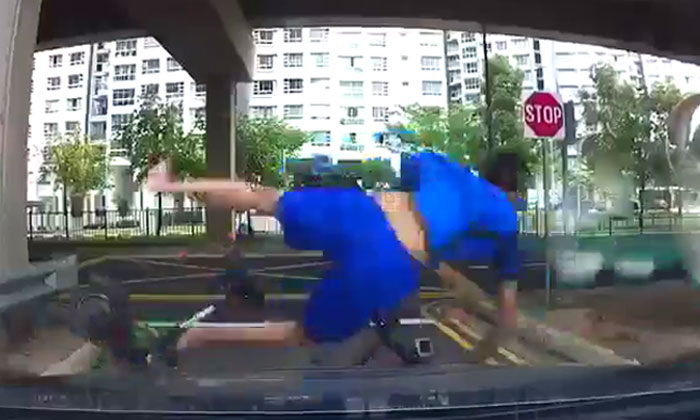 An e-scooter rider was sent flying after he zoomed in front of a car that was exiting a gated property.

A video of the incident was posted on Singapore Road Accident on Tuesday (March 19) and has since garnered over 80,000 views.

It is unclear where this happened.

In the video, the vehicle with the in-car camera is seen slowly approaching the exit gate of what appears to be a residential building.

As the car passes the gate, the e-scooter rider is seen zooming down the pavement from the left before making impact with the car and cartwheeling in the air.

After hitting the ground, he is seen clutching at his head as a female security guard approaches him to check if he is all right.

A couple exit the car and the woman is seen picking up the e-scooter as the boy is bent over, with his hands on his knees.

The man is seen talking and gesturing at the boy but the video has no sound.

The video sparked debate among netizens on which party was to blame for the accident.

Some said the driver should have checked the blind spot mirrors located at the exit.

However, many said the e-scooter rider was going too fast and that he should practice slowing down when approaching junctions and road entrances and exits.