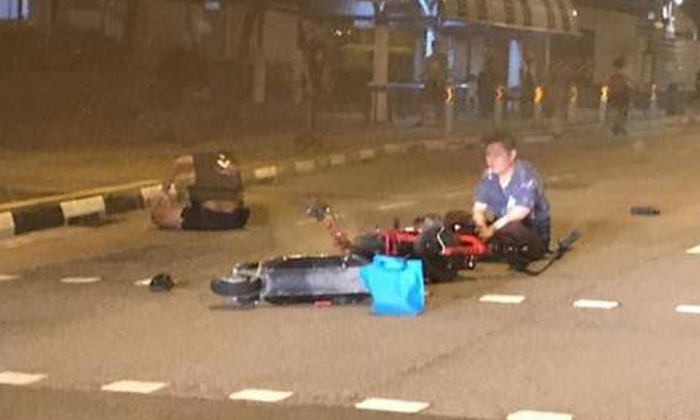 An 18-year-old man has been arrested for causing grievous hurt by a rash act after he crashed into a personal mobility device (PMD) rider while on his e-scooter in Pasir Ris.

It was previously reported that the incident occurred along Pasir Ris Drive 1 on Saturday (March 16), at around 8.20pm.

A video that went viral on Facebook shows Mr Xie Zhi Hao crossing the road on his PMD when the e-scooter rider crashed into him.

According to The New Paper, the 27-year-old sustained a cracked shoulder blade, two broken toes and other injuries.

He was taken to Sengkang General Hospital and was discharged on Sunday afternoon.

Mr Xie, a supermarket worker, was also given eight weeks' medical leave and had already spent close to $3,000 on his treatment, reported Shin Min Daily News.

He alleged that the e-scooterist fled the scene despite attempts by a passer-by to keep him there.

Related Stories
PMD rider "in shock" after e-scooter crashes into him along Pasir Ris Drive 1
Arrested: E-scooter rider runs away and refuses to comply with LTA officers who seized his overweight PMD
Boy, 15, suffers liver injuries after accident with bus in Choa Chu Kang
More About:
pmd
e-scooter
injured
accident