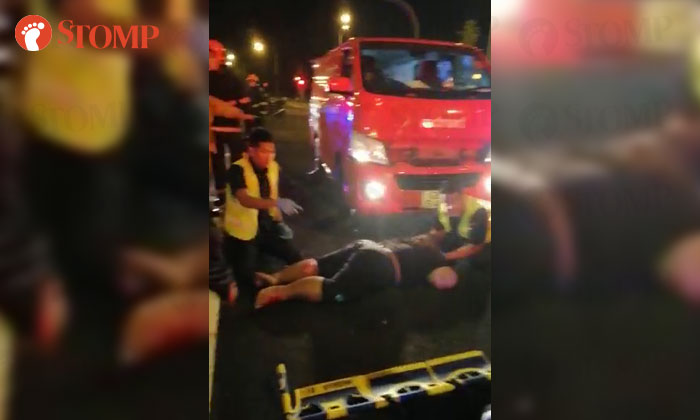 A 20-year-old woman was taken to hospital after she was hit by a van at the junction of Woodlands Avenue 9 and Riverside Road in the early hours of Monday morning (Feb 18).

Stomper Fareez alerted Stomp to the accident and shared a video he took at the scene of Singapore Civil Defence Force (SCDF) paramedics tending to the woman.

Fareez and his father were on their way to supper when they approached the scene of the accident near Republic Polytechnic.

"She was under the front bumper of the van," said Fareez in a phone interview with Stomp.

"My dad and I immediately ran over and pushed the van back together with about eight other people.

"The woman was face-down and appeared to have suffered abrasions to her face, legs and hands.

"Her e-scooter was a few metres away from her, near the traffic light."

In response to a Stomp media query, the police said they were alerted to the accident at about 12.15am.

The e-scooter rider, a 20-year-old woman was conscious when taken to Khoo Teck Puat Hospital, said a spokesman.