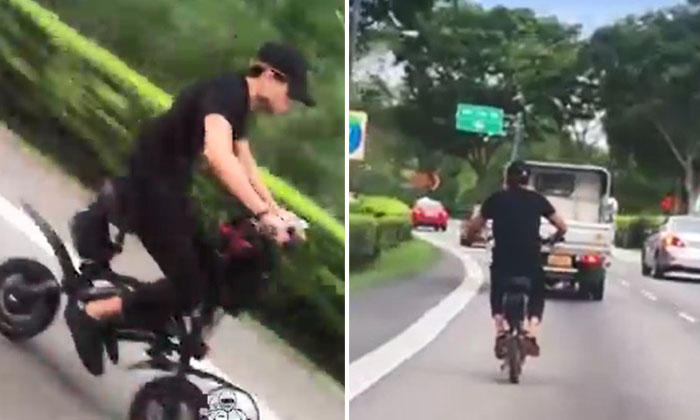 An e-bike rider was caught on video travelling along the Seletar Expressway (SLE) towards the Bukit Timah Expressway (BKE).

Stomper Mr Tan alerted Stomp to a video of the incident that was posted on Facebook page SG Roads Vigilante.

A passenger of a car took the video of the e-bike rider.

In the video, a man in a black shirt and a cap is seen riding the e-bike.

He is seen taking the exit to the BKE before the video ends.

The caption of the Facebook post stated: "This model of e-scooter is LTA approved, but surely not expressway approved."

Personal mobility devices (PMDs) are only allowed on footpaths, cycling paths, and shared paths. PMDs are not allowed on roads, as well as pedestrian-only paths.

Related Stories
Foodpanda rider cuts across 4 lanes... and crashes into another Foodpanda delivery guy
Stomper conducts 'sting operation' to capture prohibited activities in nature reserves
E-biker and driver's close shave at Telok Blangah Road: 'A bit faster and he would be in hospital'
More About:
e-bike
dangerous