Duo taunt and 'attack' couple during parking dispute in Yishun, all 4 assisting with police investigations 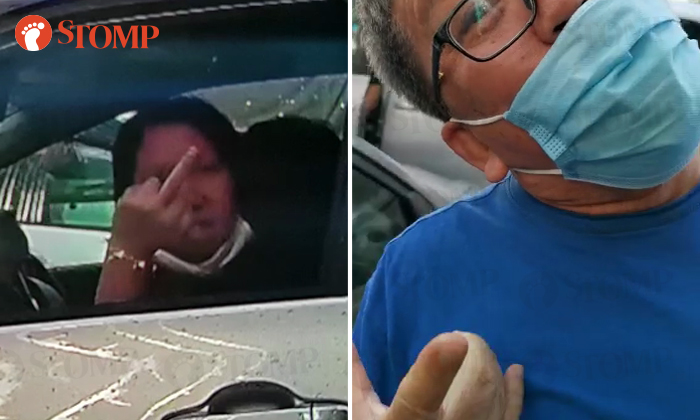 Two men and two women are assisting with police investigations after they had a road rage dispute in Yishun on Tuesday morning (May 18).

Stomper Anonymous shared videos of the incident that occurred at the open-air carpark at Block 766 Yishun Avenue 3.

Anonymous said: "A man and a woman illegally parked their car across two to three parking lots. They got agitated when my husband and I attempted to park our car next to them.

"After we parked, they blocked our car. The woman pointed her middle finger and made funny faces at us. She also opened her car door and banged on our car bonnet many times.

"The driver came out of the car and challenged my husband.

"When my husband took a videos, both the man and the woman tried to snatch my husband's phone and physically attacked him. The woman slapped my husband's arm repeatedly."

Anonymous said she called the police, who then arrived at the scene.

In response to a Stomp query, the police said they were alerted to a case of voluntarily causing hurt and intentional harassment at 9.11am.

Two men and two women, aged between 42 and 61, are currently assisting with police investigations.